Chanel Rion sits down with national leaders to discuss current events. Hear from policy makers, in their own words and what shapes their decisions. Weekly Briefing provides exclusive insights and a panel of experts to discuss today’s news.

Thank you for your viewership and support.  Feel free to contact Chanel Rion and the Weekly Briefing staff directly at . 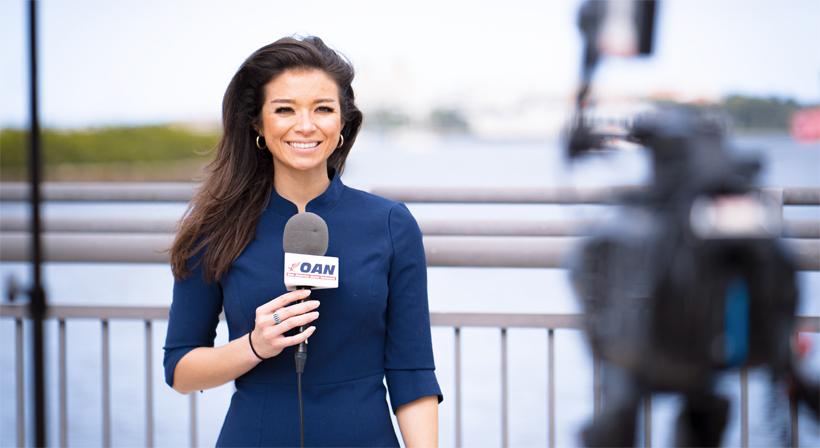 Chanel Rion is an American author, political illustrator, and White House Political Correspondent for One America News Network. Born in Texas and grew up in Missouri, Texas, and Florida, and overseas in France and South Korea.

Chanel has become known as the best political illustrator in the country for constitutional conservative and anti-leftist causes and as President Trump’s most stalwart graphic warrior against leftism.

Chanel has been frequently described as one of Hillary Clinton’s “worst nightmares” because she stands as a fierce foe of anything Clinton, of everything Obama, and as a total and unrelenting enemy of academic left-liberalism and political correctness anywhere she’s out to stamp it out and when Chanel skewers the enemy, it can be a powerful thrust sometimes shocking, always articulate linguistic and graphic gems that strikes the heart of the insanity of the political left.

As a Harvard trained International Relations graduate, some might think Chanel comes from a surprising place to be such a dedicated part of the Trump Army but she has been aboard the Trump Train from its first week and spent 20-hour days during the entire 2016 New Hampshire primary on the ground for the Trump campaign, working the New Hampshire winter, doing her part.

In January 2016, she and Courtland and her own family joined the Trump family and celebrants for the New Hampshire Primary victory gathering at week’s end. “We all knew that night at the victory celebration in New Hampshire that this was absolutely going all the way that we had chosen well.”

While producing illustrations for President Trump and family, one of Chanel’s illustrations for Donald Trump Jr. was used by him to help win and celebrate the media-historic battle that Don Jr. waged publicly to defeat Rachel Maddow and MSNBC when they tried to smear the Trumps with a fake news “tax expose” using fake documents.

When Don Jr. turned their “fake news” utterly against them, the debacle stained MSNBC and Rachel Maddow forever and ended the phony tax debate categorically by showing the President paid over 28 million dollars in taxes in a single year and that the actual frauds were those of Rachel Maddow and MSNBC.

Don Jr. cited Chanel’s work as a proof of how such articulations on social media could be used to defeat the left, fake news and Washington’s socialist swamp.

Chanel is also the developer, author, and illustrator of the first three volumes of her traditional girl’s mystery series.

Chanel’s series promotes not only the spirit of the traditional family but the self-reliance, ingenuity, independence, and strength of American girls who believe in traditional homes, in conservative values, in having faith, and in having traditional lives and futures that encourage families to succeed at home and to create family-centered and home-centric feminine and family enterprises. But this is not the script typically foisted on girls in the name of female independence today. Chanel’s series creates a world for girls who want to Make America Great Again the old fashioned way and to raise new generations of the kinds of families that always did. It will not make nail-eating radical feminists happy.

Chanel’s books, each of which contain over 1,000 word vocabulary enhancing helps are being offered as language trainers in grim and dedicated rote English-learning venues including China and South Korea.

Chanel is building a summer camp with her “Visit the Real America” outreach that Chanel has been developing as an American conservative cultural initiative to introduce a traditional America to those who cross the seas as visitors.

Chanel is married to Courtland Sykes. Unsurprisingly, he saw the DeJour article and they met at what was a CIA recruiting event at Harvard.

Chanel is One America News’ Chief White House Correspondent and the founder and curator of Wordebys.com.