Real America with Dan Ball brings you the latest political headlines, by interviewing news makers of the day, to include politicians, lawmakers, pundits, celebrities and social media influencers. 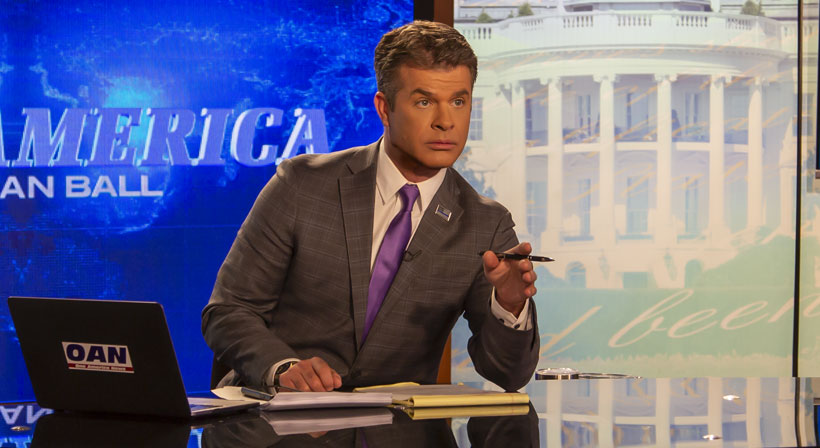 Emmy award winning journalist Dan Ball is currently the host of “Real America”, the Number #1 Primetime talk-show on the One America News Network, he also hosts a travel/food reality show called “Hungry Heroes” which airs on OAN and AWE Networks.

Dan is a true patriot, who has dedicated his life to the service of his fellow Americans. Dan grew up in the small Northwest Ohio farming village of Archbold. Dan hails from a middle class, divorced family, the middle child of 5 boys, he understands the struggles, issues and concerns of the hard working American family, because he’s lived them.

Dan was primarily raised by his maternal grandmother, who taught Dan about the importance of conservative and Christian values, by attending a Mennonite church during his younger years.

During his junior year in high school, Dan watched as America went to war with Iraq in 1991, that inspired him to enlist in the United States Air Force as a journalist. He believed one of the best jobs in the military would be keeping our brave troops informed and entertained while they serve abroad.

After completing his tour of duty, Dan began his 26 year career in broadcast television news, serving communities such as, Las Vegas, Fresno, Palm Springs and Philadelphia.

Like many patriotic Americans, Dan became frustrated with the gridlock and partisan fighting in Washington so he decided to do something about it. In 2017, he launched his bid for California’s 36th Congressional District, a seat once held by Sonny and Mary Bono. Unfortunately, the establishment had other plans and so did Dan.

After the loss, he remained focused and became an outspoken conservative voice, which made him quickly realize that he would not be welcomed back into the extremely liberal and biased mainstream news media. Sticking to his convictions and beliefs, Dan searched for a platform that would allow him to serve conservatives and patriotic Americans who were being silenced by Democrats, big tech and the woke cancel culture mob.

In 2020, the Herring family, owners of One America News gave Dan that platform and “Real America” was born. Dan’s show is an hour long, high energy political talk show featuring political leaders and news makers of the day, ranging from elected officials and social media influencers, to conservative celebrities and everyday real Americans!

For Dan, the conservative movement is not just a job or career, but a new life mission. In fact, it’s a family business, his fiancé, Peyton Drew works as his Talent Producer for Real America. Dan’s brash, no holds barred, uncensored delivery make him one of the only network TV hosts to provide truthful and factual reports, that other mainstream news agencies and hosts won’t even discuss. Providing his viewers and listeners an unfiltered look at politics and issues facing real everyday Americans.

In his spare time, Dan enjoys hiking, hunting, fishing, target practice and spending time with his teenage daughter Avery. In addition to his role as host of Real America, Dan also travels the country, speaking to Republican and conservative groups along with making appearances on conservative talk radio, TV and podcasts.

Dan believes in the America First movement and its goal of returning control of the government to “We the People”.

At 47 years old, Dan says he has learned a lot of valuable life lessons over the past couple of years, especially since the radical progressive movement in our country has become so mainstream. Some of those lessons that Dan believes will help all patriots lead a better more fulfilling life, “stop thinking and caring about what others say about you, stand by your convictions, beliefs and faith in God. Value, cherish and appreciate your family, speak truth to power and never, never let anyone define you and above all, be proud to be an American.”