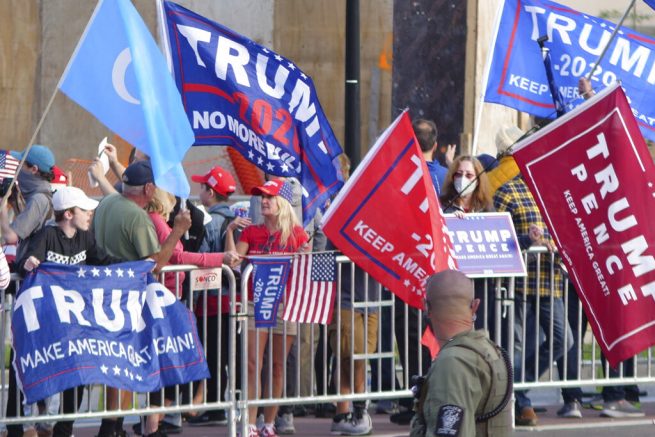 President Trump briefly left the Walter Reed Medical Center Sunday to wave to large crowds gathered outside the hospital who were rallying for his recovery and praying for his health during a motorcade trip.

On Sunday, White House spokesperson Judd Deere told reporters all possible safety precautions were taken for the President to greet his supporters. Deere said the decision was made after receiving approval from the President’s medical staff.

As the sun went down, hundreds of people stayed outside Walter Reed waving flags and wearing MAGA hats with one supporter stating they are fighting alongside the President.

The question is why are you here today?

The President’s team has released photos of him inside the hospital appearing to be hard at work and continuing his presidential duties despite his positive COVID-19 diagnosis.

On Sunday, the President’s medical team said they were optimistic about his recovery and indicated he could be released from Walter Reed in the coming days.

“If he continues to look and feel as well as he does today, our hope is that we can plan for discharge as early as tomorrow (Monday) to the White House where he can continue his treatment course,” stated Dr. Brian Garibaldi.