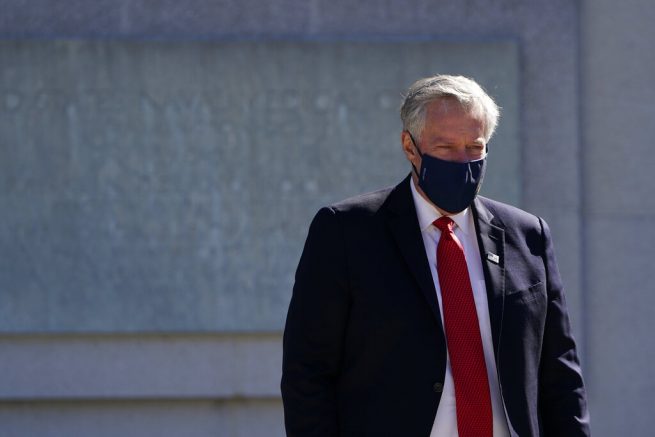 White House Chief of Staff Mark Meadows walks towards the media to give a time update for a briefing at Walter Reed National Military Medical Center in Bethesda, Md., Saturday, Oct. 3, 2020. Trump was admitted to the hospital after contracting the coronavirus. (AP Photo/Susan Walsh)

White House Chief of Staff Mark Meadows recently offered insight on the potential for further pandemic stimulus after the President ended negotiations in Congress this week. While speaking to reporters Wednesday, he confirmed negotiations are dead, but said the President is receptive to passing individual stimulus measures on a case-by-case basis.

Meadows’ comments came one day after President Trump tweeted the House and Senate should immediately approve $25 billion in relief for the airline industry and another $125 billion for the Paycheck Protection Program.

The House & Senate should IMMEDIATELY Approve 25 Billion Dollars for Airline Payroll Support, & 135 Billion Dollars for Paycheck Protection Program for Small Business. Both of these will be fully paid for with unused funds from the Cares Act. Have this money. I will sign now!

The White House Chief of Staff said there’s a higher chance of striking a deal if they handle legislation on an “a-la carte” basis.

“We’re looking at the potential for standalone bills, there’s about 10 things that we agree on and if the Speaker is willing to look at those things on a piece-by-piece basis then we’re willing to look at it,” Meadows explained. “It became very obvious over the last couple of days that a comprehensive bill was just going to get to a point where it didn’t have really much Republican support at all.”

In the meantime, President Trump said if House Speaker Nancy Pelosi passes a standalone bill for more stimulus checks, he will sign off on it immediately.