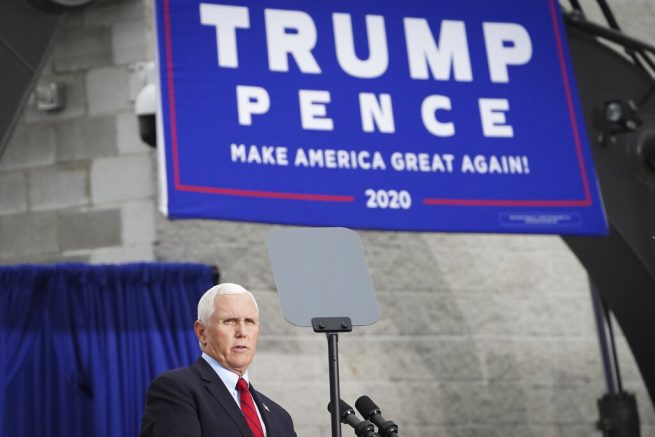 Vice President Mike Pence stressed the importance of standing up for American values while describing the impending election as a struggle for the preservation of the country’s historical character. This message was the driving force behind Pence’s campaign speech in Exeter, Pennsylvania on Tuesday.

The rally was held just about 13-miles away from Biden’s hometown of Scranton in a state that voted for Democrat presidents for two consecutive decades until flipping red in 2016 and helping propel President Trump into the White House.

“I know we’re not too far from our opponent’s boyhood home, but it’s Trump country now,” the vice president stated. “…when this president stands up for faith and family and the American flag, I stand with President Donald Trump.”

Pence took specific aim at Joe Biden for what he described as a failure to condemn acts of violence across the country, particularly the absence of an unequivocal disavowal of groups aligning themselves with the concept of Antifa by the Democrat nominee.

As noted by both the Los Angeles Times and the Wall Street Journal‘s editorial pages over the last two days, Biden’s Monday speech in Pittsburgh did contain remarks admonishing against violent acts during protests. However, it conspicuously lacked any specific mention of Antifa or the left wing.

“The men and women of Pennsylvania, you should know, yesterday Joe Biden never condemned Antifa, he never called on Democrat mayors to get their cities under control, he never called out his campaign staff or his running mate for raising money to bail out violent criminals and Joe Biden never even offered a plan to end the violence,” Pence stated.

The vice president sought to emphasize the decision over whether to support Biden or President Trump in November is about more than just the immediate need to quell violent uprisings. He also stressed what he described as Biden’s ideological inconsistency in an effort to paint the Democrat nominee as not so much the moderate he is typically labeled as, but more a political opportunist lacking a specific moral compass driving his policies.

Joe Biden is willing to sacrifice hundreds of thousands of blue-collar jobs for the sake of his radical environmental agenda. With four more years of President @realDonaldTrump, we’ll have MORE fracking, more American energy & energy independence for generations to come! pic.twitter.com/FoTFqetrzq

Pennsylvania is one of the key battlegrounds needed by either party to secure the road to the White House and polls have consistently shown a tight race for the 20 electoral votes wielded by the Keystone State.