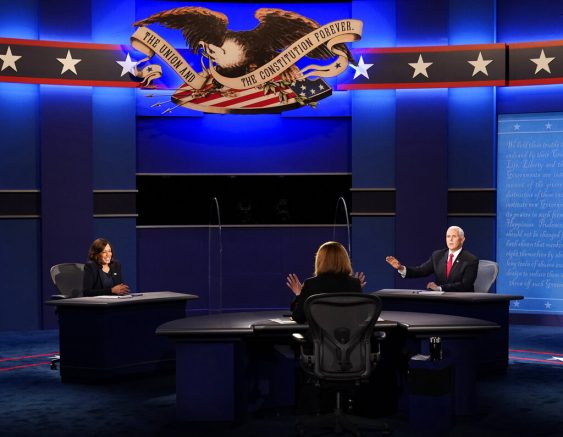 Vice President Mike Pence and Democrat nominee Sen. Kamala Harris went head-to-head for the first and only vice presidential debate with both sharing their goals for the American people under the next presidential term.

The debate took place in Salt Lake City and was moderated by USA Today’s Susan Page while having the two candidates be separated with plexiglass and sitting 12-feet apart.

The debate kicked off with Pence “backing the blue” when asked about his stance on law enforcement. He shared how he disagrees with the left’s message of accusing America of being a systemically racist nation.

“I must tell you this, this presumption that you hear consistently from Joe Biden and Kamala Harris that America is systemically racist and that as Joe Biden said, that he believes that law enforcement has an implicit bias against minorities, is a great insult to the men and women who serve in law enforcement,” he stated.

The vice president also highlighted President Trump’s response to the environment and the economy while warning that under a Biden administration the U.S. could return the Paris Climate Accords and enact the Green New Deal.

“Now Joe Biden and Kamala Harris could put us back in the Paris Climate Accord, they’d impose the Green New Deal, which would crush American energy and increase the energy cost of American families,” Pence explained. “President Trump and I believe the progress we have made in a cleaner environment is happening because we precisely have a strong free market economy.”

“We hope she gets a fair hearing and we particularly hope that we don’t see the kind of attacks on her Christian faith that we saw before,” Pence stated. “The Democrat chairman of the Judiciary Committee, before when when Judge Barrett was being confirmed for the Court of Appeals, expressed concern that the dogma of her faith lived loudly in her.”

At the end of the debate, both sides urged for American’s to get out and register to vote with the presidential election less than a month away.

President Trump and Democrat nominee Joe Biden will face off next week while taking the podium for the second presidential debate.