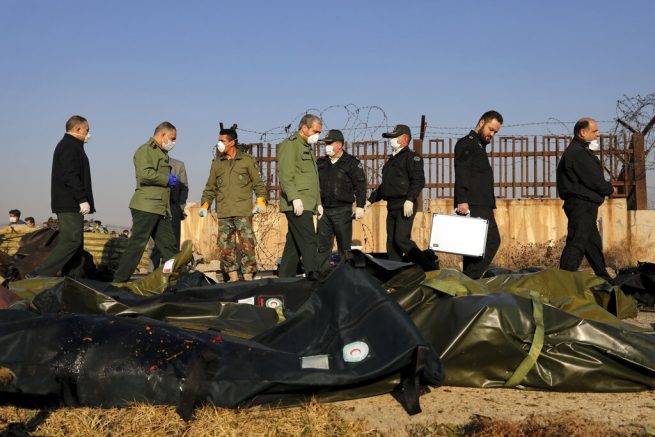 Security personnel work at the scene where a Ukrainian plane crash in Shahedshahr, southwest of the capital Tehran, Iran, Wednesday, Jan. 8, 2020. A Ukrainian airplane carrying over 170 people crashed on Wednesday shortly after takeoff from Tehran’s main airport, killing all onboard. (AP Photo/Ebrahim Noroozi)

A Ukrainian 737 airliner crashed in Iran shortly after take-off on Wednesday morning. While citing preliminary data, Ukrainian President Volodymyr Zelensky said all 176 passengers and nine crew members on board were killed in the incident.

The plane, carried by Ukraine International Airlines, had allegedly been in service for over three years. The jet was departing from Tehran, Iran and was headed to Ukraine’s capital city of Kiev prior to the crash.

The Iranian Civil Aviation Organization previously reported that the flight was already on fire and on its way back to the airport when it crashed in Tehran. The plane was seen changing its direction by eye witnesses with flames inside.

Reports are now suggesting the Ukrainian airliner may have, in fact, been shot down. Senior U.S. Defense and U.S. Intelligence officials have reportedly said the plane was hit by an anti-aircraft missile system, most likely from Iran. Other reports have suggested Ukrainian officials want to investigate the possibility of a missile strike, and investigate the crash site after seeing photos of the wreckage.

The airline’s president, Evgeny Dykne, confirmed the captain and pilot had a combined total of more than 23,000 hours of experience on Boeing 737 jets.

“On behalf of our company, I offer deep condolences to the families of the people who were on board, to everyone close to them,” he stated.” It was one of our best planes, with an excellent, trustworthy crew.”

Among the dead included citizens from Canada, Sweden, Germany, the U.K. as well as Ukraine. 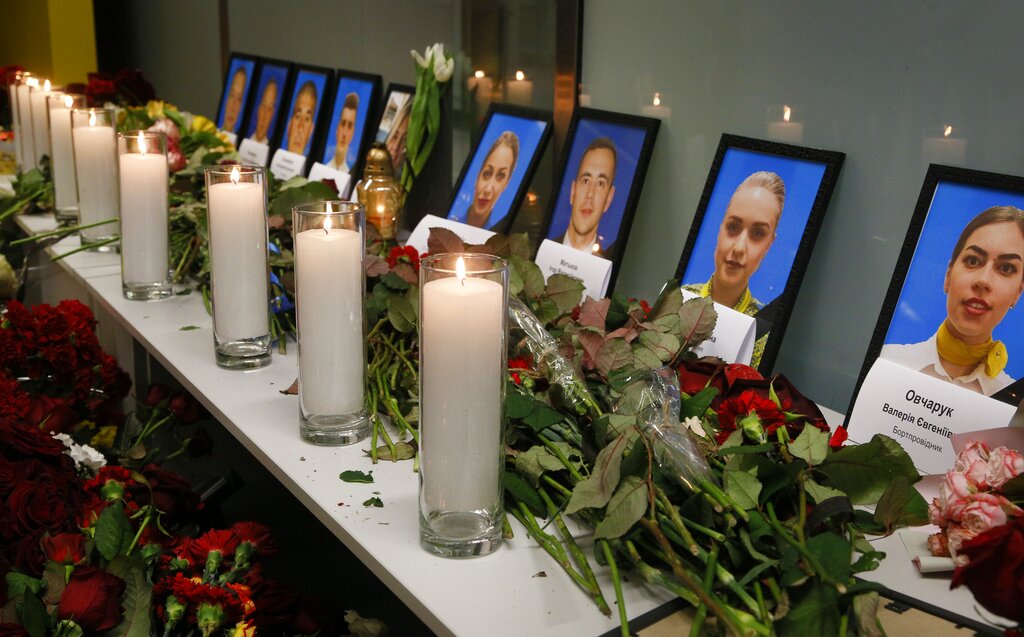 Flowers and candles are placed in front of portraits of the flight crew members of the Ukrainian 737-800 plane that crashed on the outskirts of Tehran, at a memorial inside Borispil international airport outside Kyiv, Ukraine, Wednesday, Jan. 8, 2020. A Ukrainian airplane carrying 176 people crashed on Wednesday shortly after takeoff from Tehran’s main airport, killing all onboard, Iranian state TV and officials in Ukraine said. (AP Photo/Efrem Lukatsky)

Investigators from Boeing as well as national authorities are assessing the crash site to determine the exact cause. It was previously reported that an act of terrorism could be behind tragic crash. This comes as tensions in Iran continue to escalate over the killing of Iranian General Qasem Soleimani. Iran launched missiles targeting U.S. troops stationed in Iraq on the same night of the plane crash.

“45 Ukrainian specialists already arrived to Iran as part of the rescue and recovery group, including those from the State aviation authority, National bureau of investigation of air incidents with civil aircrafts and representatives of Ukraine International Airlines,” announced Ukrainian President Volodymyr Zelensky. “We expect them all to become involved with the work of commission, including the transcription of the black box records.”

Boeing has since released a statement, saying it is currently investigating the incident. In the meantime, many flights to and around Iran have either been rerouted or canceled altogether.