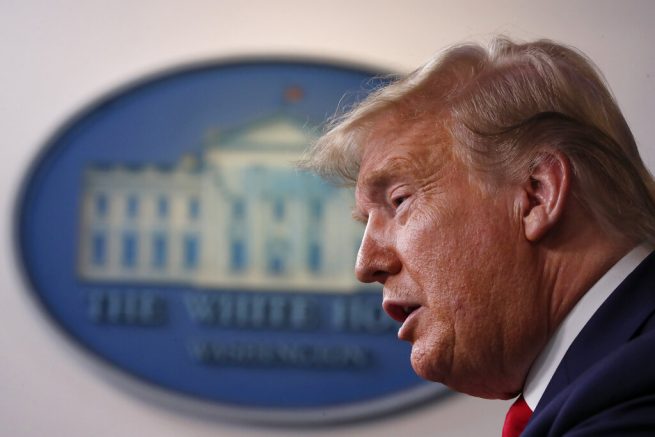 Television stations across the nation have received cease and desist letters from America First Action, one of the largest groups aligned with the president’s reelection campaign. The documents, which were issued on Wednesday, targeted a Priorities USA ad that sought to undermine the president’s response to the coronavirus outbreak.

The ad, which ran heavily in key battleground states, played the president’s comments out of context over a graph, showing the curve of rising cases in the U.S.

Donald Trump issued a cease and desist letter to stop our ad from running because he doesn’t want Americans to know the truth about his failed leadership. Help keep it on the air by donating herehttps://t.co/ZeRIriA3Y8 pic.twitter.com/Jdh1GY9HHS

Legal counsel for the Republican group wrote, “We will not stand idly by and allow you to broadcast false, deceptive and misleading information concerning President’s Trump’s health care positions without consequence.”

The $6 million ad is titled “Exponential Threat” and cut together audio of the president to imply that he believes COVID-19 is a hoax. Independent fact checker websites have pointed out that this is false. In fact, the spliced phrases were from a statement the president made about the left politicizing the pandemic during a rally in February.

“Now the Democrats are politicizing the coronavirus. You say, ‘How’s President Trump doing?’ They go, ‘Not good.’…This is their new hoax.” – Donald Trump, 45th President of the United States

The ‘hoax’ line has become a trend for Democrats after potential nominee Joe Biden also ran an attack ad using the same speech.

In times of crisis, American presidents have always stepped up to meet the moment. But all we've gotten from Donald Trump are lies, excuses, and scapegoats.

Trump has failed our country at a time when we need him most. pic.twitter.com/d2vxUHGiH0

Meanwhile, the president has restricted non-essential travel in or out of the U.S. He has been working with private and public sectors to provide virus aid to Americans.

If stations refuse to comply with the cease and desist, the campaign group intends to take further legal action.