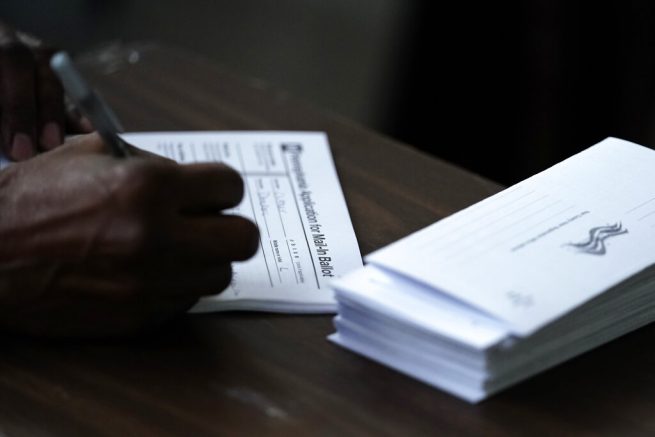 FILE – In this Sept. 29, 2020, file photo Philadelphia City Council President Darrell L. Clarke fills out an application for a mail-in ballot before voting at the opening of a satellite election office at Temple University’s Liacouras Center in Philadelphia. (AP Photo/Matt Slocum, File)

Ohio’s most populous county gained national attention after it failed to properly roll out mail-in ballots to voters. On Friday, the Franklin County Board of Elections announced about 50,000 people had received the incorrect ballot.

“I look down, start reading through the candidates and see it is not Joyce Beatty and Mark Richardson on it,” explained resident Ashley Castricone. “Instead, it’s Steve Stivers and Joel Newby, who are not in my district for representative.”

According to election officials, the error happened last week when an employee changed a setting on the machine that places ballots into envelopes.

“A scanner on that equipment wasn’t functioning the way it should,” stated Director Ed Leonard. “It should be scanning to confirm that the ballot and the envelope are the correct ballot and envelope that the voter should receive.”

The board added it has already begun to print replacements that will be ready for delivery by the end of the weekend. However, the error has furthered the ongoing national argument about absentee ballots and whether they promote voter fraud.

President Trump took to social media to condemn the mistake. He emphasized the situation was out of control.

Ohio Secretary of State Frank LaRose called the incident a “serious mistake,” but assured voters they would still have a fair election.

Election officials noted there are multiple safeguards to ensure everyone only votes once. They reiterated they will mail information to the affected voters and list their options moving forward.