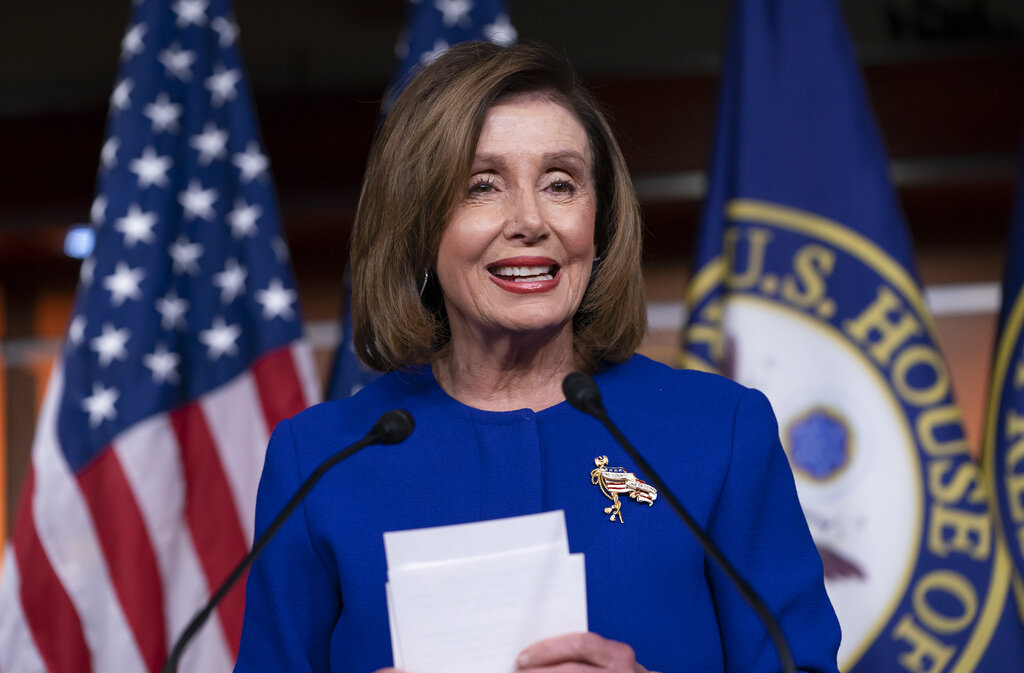 Speaker of the House Nancy Pelosi, D-Calif., arrives to meet with reporters following escalation of tensions this week between the U.S. and Iran, Thursday, Jan. 9, 2020, on Capitol Hill in Washington. (AP Photo/J. Scott Applewhite)

In a Friday letter to House Democrats, Speaker Nancy Pelosi announced she would release articles of impeachment sometime in the coming week.

“I have asked Judiciary Committee Chairman Jerry Nadler to be prepared to bring to the floor next week a resolution to appoint managers and transmit articles of impeachment to the Senate,” wrote Pelosi. “I will be consulting with you at our Tuesday House Democratic Caucus meeting on how we proceed further.”

In response, the president mocked the speaker for her ineptitude as a leader of the House. He pointed to Pelosi’s increasingly questionable mental health and indecision in the inquiry as evidence she has allowed the impeachment to proceed dishonestly and corruptly.

George @GStephanopoulos, ask Crazy Nancy why she allowed Adam “Shifty” Schiff to totally make up my conversation with the Ukrainian President & read his false words to Congress and the world, as though I said it? He got caught! Ask why hearing was most unfair & biased in history?

He went on to question why she would allow Rep. Adam Schiff to “lie before Congress.”

Why did Nervous Nancy allow corrupt politician Shifty Schiff to lie before Congress? He must be a Witness, and so should she!

Pelosi’s stated reason for withholding articles of impeachment from the Senate was to ensure the Senate put on a “fair trial.” Many in Washington have called her out as a hypocrite for wanting to slow proceedings in the Senate after having spent months rushing impeachment in the House.

Some have speculated that, in spite of Pelosi releasing the articles, she will still be very involved in the progress of impeachment. However, any future role will likely be symbolic. Senate Majority Leader Mitch McConnell has made it clear the Senate will hold their trial swiftly, using the Clinton precedent, and Pelosi will have no say in how it proceeds.

There will be no haggling with the House over Senate procedure. We will not cede our authority to try this impeachment. The House Democrats’ turn is over. The Senate has made its decision. This is for the Senate, and the Senate only, to decide.