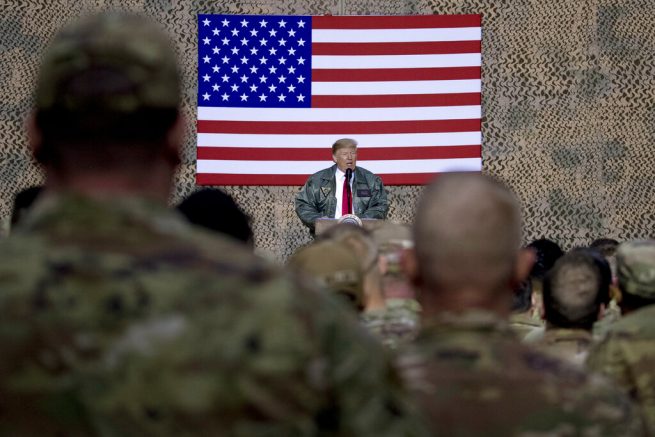 FILE – In this Dec. 26, 2018, file photo, President Donald Trump speaks to members of the military at a hangar rally at Al Asad Air Base, Iraq. (AP Photo/Andrew Harnik, File)

As one of the biggest headlines in recent weeks, Jeffrey Goldberg released a story alleging President Trump called fallen soldiers “suckers and losers” before opting out of attending an Armistice Day memorial ceremony at Aisne-Marne American Cemetery outside of Paris, France.

However, critics immediately pointed out red flags associated with the story, which most prominently include the anonymous sourcing used to construct the article. The concern lies in the fact that courts typically protect anonymity when political speech is concerned.

While the overall thesis of Goldberg’s article concerns alleged private conduct of President Trump, which is not protected as political speech by the First Amendment, he made sure to include examples of government action on the part of the president.

With a fair amount of legal protection assumed by Goldberg, critics have brought into question the validity of his sources who have chosen to remain under the cloak of anonymity.

Furthermore, President Trump claimed his cemetery visit was cancelled by the Navy due to poor flying conditions as he was planning on taking a helicopter to visit the cemetery about 65-miles outside of Paris where he was staying. He made the following remarks on the matter:

“I was ready to go to a ceremony. I had two of them. I had one the following day. It was pouring and I went to that, but the helicopter could not fly. The reason it couldn’t fly because it was raining about as hard as I’ve ever seen.”

Newly released FOIA documents from the day prove this claim. The documents read:

“We have a USAF weather SNCO at Belleau Wood, and have been in contact with the French as well as presidential weather in the rear. Weather will not support today’s mission.”

Jeffrey Goldberg has self admittedly been wrong in the past, especially when it comes to citing his trustworthy sources. In 2008 he published an article on slate titled “How Did I Get Iraq Wrong?” In this article he refers to a 2002 article of his called “The Great Terror” in which he blames a German foreign intelligence officer, August Hanning, of leading him to believe and publish claims that Saddam Hussein was going to posses an atomic bomb in a matter of three years.

Goldberg said he found Hanning to be particularly credible because his analysis “so obviously cut against the desires of his bosses.” Bosses including then Chancellor of Germany Gerhard Schroder who was outwardly opposed to an armed invasion of Iraq.

Another red flag is being raised from journalists like Sagaar Enjeti of The Hill who had this to say about the timing of this incident and Goldberg’s history of siding on the part of keeping American troops in the Middle East:

“I’m going to put my cards on the table, I think it’s awful convenient that this story drops hours after the Trump administration appoints an ambassador to Afghanistan who affirmatively says he wants to withdraw troops. What do you think?”

The credibility of Goldbergs story seems to be accepted or rejected upon partisan lines, but 67-percent of Americans stand against Goldberg and support bringing the troops home from Afghanistan.