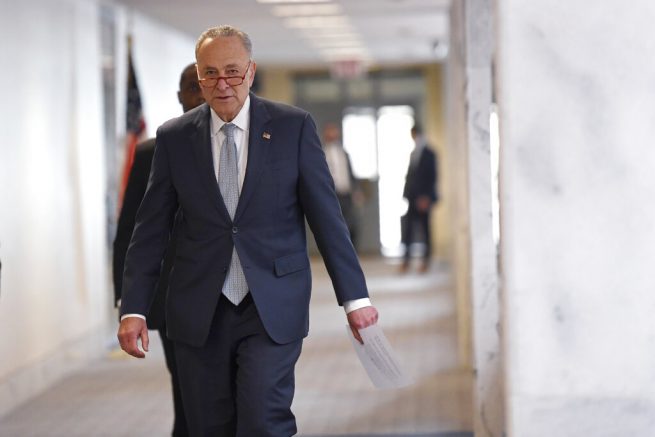 Senate Minority Leader Sen. Chuck Schumer of N.Y., arrives for a meeting on Capitol Hill in Washington, Friday, March 20, 2020, to work on an economic relief package regarding the coronavirus. (AP Photo/Susan Walsh)

According to Senate Minority Leader Chuck Schumer (D), President Trump wants direct checks for Americans most affected by the coronavirus sent out in less than two weeks.

During an interview Wednesday, the Democrat lawmaker said the new coronavirus stimulus package will be implemented as soon as possible. This came after the White House and the Senate struck a bipartisan deal hours earlier on the $2 trillion legislation.

Sen. Schumer noted that part of the new bill will increase unemployment insurance, so that citizens are financially aided after their direct checks.

“That first check is nice, but how are you going to pay the rent, buy the food and do things in the months after if you’re still unemployed?” he asked. “…it’s more money because it pays you…for most workers, their full salaries.”

We’re fighting to ensure no one goes into financial ruin because of coronavirus. Service and industry workers, gig workers, freelancers, and more.

We’re fighting to make sure there are no bailouts without strict conditions that put people and workers first. pic.twitter.com/NQhlFRi47b

Schumer said Democrats are satisfied with holding out on the initial legislation that was introduced by the Senate last Friday. He added that there is now greater accountability and transparency over corporations receiving aid from the package.