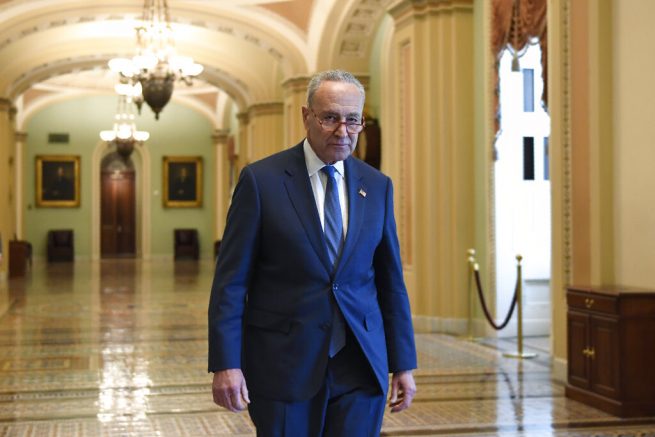 Senate Minority Leader Chuck Schumer is seeking to force the chamber to vote on witnesses at the start of the impeachment trial. During remarks on the Senate floor Tuesday, Schumer said there will be votes at the beginning of the trial on whether to call four witnesses Democrats have recommended.

The Democrat also accused Senate Majority Leader Mitch McConnell of being unwilling to help get the facts for a Senate trial over his refusal to call witnesses. Schumer dismissed the idea of voting on witnesses after opening arguments.

“The Republican leader and several Republican senators have suggested that each side complete their arguments and then we decide on witnesses,” he stated. “This idea is as backward as it sounds — trials should be informed by witnesses and documents, they’re not an afterthought.”

Schumer also claimed it’s the Senate’s job to go outside of the record established by the House’s impeachment inquiry.

If any Senate Republican votes to prevent witnesses and documents from coming before the Senate:

The American people will see that they are part of a cover-up. pic.twitter.com/Q6UQI3Dkcz

Meanwhile, Senate Republicans are preparing to proceed with setting the framework for an impeachment trial without Democrat support. While speaking after a Republican Tuesday, Majority Leader Mitch McConnell said he has enough votes within his 53 member caucus to pass a draft set of rules. The move ultimately denies Schumer’s request for additional witness testimony and new evidence to be considered.

McConnell has said many times the Senate will follow the same rules that were followed during Bill Clinton’s impeachment. This comes a day after Senate GOP introduced a resolution that aims to dismiss the charges brought by the House against the president.

Sen. Josh Hawley: "I am introducing a resolution to update the Senate's rules to account for this unprecedented attempt by the Speaker of the House to delay, to deny, to obstruct a trial in the U.S. Senate."pic.twitter.com/KSsVqrfdeB

While moderate GOP senators like Mitt Romney and Susan Collins said they would like to hear from witnesses such as John Bolton, they agree a decision can be made once a trial is underway. In the meantime, House Speaker Nancy Pelosi has continued to withhold the articles from the upper chamber.