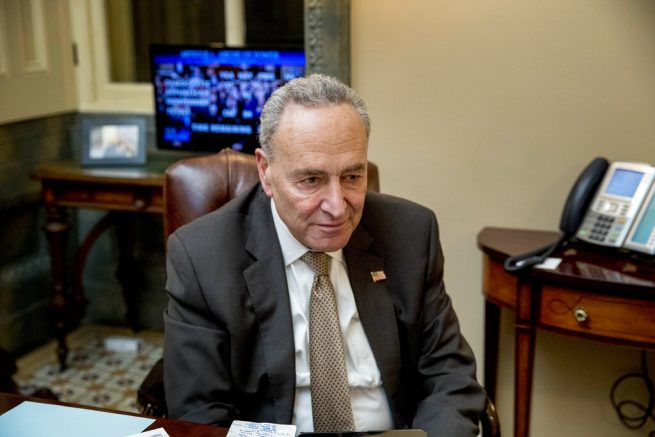 “According to this story, there was even a dramatic intervention-style meeting about this in the Oval Office where President Trump’s most senior National Security officials pleaded with him to release the military aid to Ukraine,” Schumer read.

The article alleges White House officials were also concerned Congress would intervene in the president’s plan to withhold the funds.

So far, neither Senator McConnell nor any Republican Senator has articulated a single good reason why the trial shouldn’t have the witnesses or the documents we requested.

The American people deserve to know the truth.https://t.co/ECz175wUpL

President Trump has said multiple times that he withheld the aid because he was concerned about corruption in Ukraine and it had nothing to do with digging up dirt on a political adversary. He has continued to call out Democrats for protecting former Vice President Joe Biden as he and his son Hunter face accusations of corruption in the country.

The Democrats will do anything to avoid a trial in the Senate in order to protect Sleepy Joe Biden, and expose the millions and millions of dollars that “Where’s” Hunter, & possibly Joe, were paid by companies and countries for doing NOTHING. Joe wants no part of this mess!