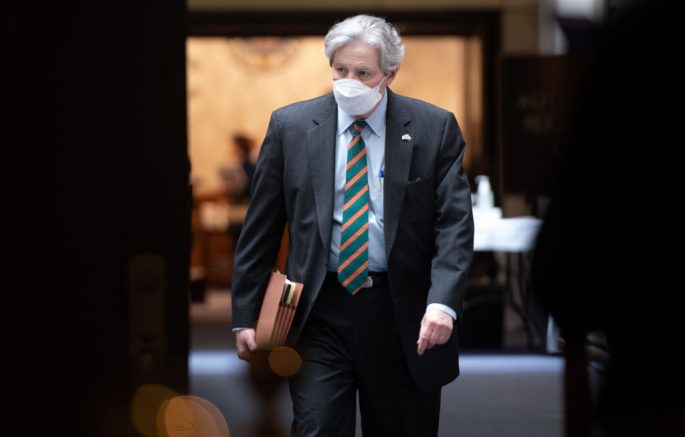 US Senator John Kennedy, Republican of Louisiana, wearing a mask to protect himself and others from COVID-19, known as coronavirus, leaves following the weekly Republican policy luncheon on Capitol Hill in Washington, DC, May 5, 2020. (Photo by SAUL LOEB / AFP) (Photo by SAUL LOEB/AFP via Getty Images)

Looks like we're going into overtime. It doesn't weaken democracy to insist elections be free and fair.

The courts should hear President Trump’s allegations of election irregularities, and the same goes for allegations from anyone else. All legal votes must be counted.

He added that tens of millions of Americans remain skeptical about the vote-counting process. The Louisiana senator also appeared to support having the courts weigh-in on alleged irregularities.

“Tens of millions of Americans believe, whether you agree with them or not, that we need to send Big Bird to some of these states to teach them how to count,” the Republican noted. “For the integrity of the electoral process and the system that we have chosen to effectuate our democracy, we have got to allow our courts to hear these allegations of voting irregularities.”

The media is not a court of law.

For the integrity of America’s democracy, all legal votes should be counted, and the courts must resolve all allegations of voting irregularities.

This came as the Trump campaign has launched several legal challenges to election results in key swing states.