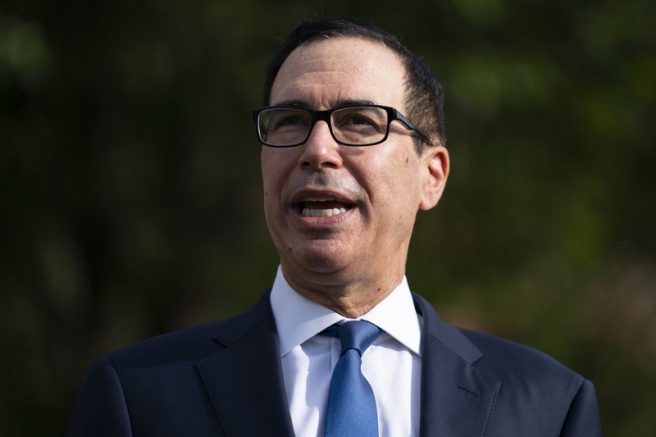 Treasury Secretary Steve Mnuchin has called on lawmakers to set aside political differences and come together on a new stimulus package. On Tuesday, he testified in front of a House select subcommittee on the coronavirus crisis and said he’s ready to continue talks to get relief to Americans.

“I would publicly say I am willing to sit down at the negotiating table with the speaker (Nancy Pelosi) with no conditions whatsoever any time,” Mnuchin stated. “Other than that, I think the chair expects me here for a bit longer.”

The Treasury chief said divisions on both sides of the aisle are beginning to shrink and Republicans are willing to up their proposal to $1.5 trillion. Mnuchin vowed the increased funds would be allocated to state and local governments.

“But what’s more important is what is the breakdown in getting money to American workers, American families, kids, where we can agree on money,” he explained. “There is tremendous areas of agreement and that’s what we should be doing right away.”

Stimulus talks fizzled out in early April. Soon after, unemployment benefits expired at the end of July.

Democrats were headstrong on their position to not budge on a package proposal that came in at less than $2.2 trillion. However, they also wanted a package that covered a wide range of issues, which included bending the eligibility rules in order to allow some non-citizens to receive stimulus checks.

“I’m prepared to sit down with the speaker at any time to negotiate, I think the issue is not what is the top-line,” said Mnuchin. “I think the issue now is we need now support quickly, that’s what important to the American economy and if we need to do more we can come back.”

Meanwhile, the Treasury secretary announced a new lending program, which will issue $25 billion to $50 billion in loans to mid-sized businesses. Additionally, he said President Trump is looking to roll out guidelines for renters, which would give them eviction moratoriums if they can prove their cannot pay rent due to the coronavirus pandemic.