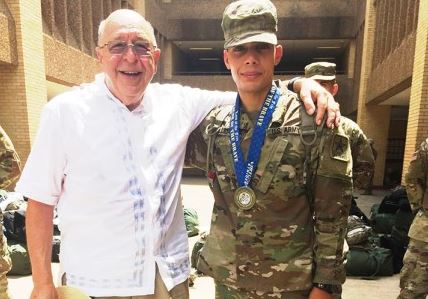 When he couldn’t be found, the military reportedly notified local hospitals, contacted community law enforcement and actively searched for him on the base. When he did not return after 30 days, Halliday was labeled a deserter.

However, the soldier was reportedly spotted near the Mexican border begging for food within the last couple of weeks. The possible sighting renewed investigation into the case by the Army and Halliday’s parents, who believe foul play may have played a role in his disappearance.

On Friday, Patricia and Robert Halliday posted signs and handed out posters of their son around the border in hopes of gaining the community’s help with their search.

MISSING SOLDIER UPDATE: I continue to follow the investigation into the disappearance of Ft. Bliss soldier Richard Halliday. Today, Richard's parents held a prayer rally. New: Congresswoman Veronica Escobar met with the family. What she says about his disappearance at 10pm. pic.twitter.com/lbi594G2XS

Halliday’s disappearance came shortly after he was allegedly reprimanded by Army officials for drunk driving and crossing the Mexican border, which soldiers are not authorized to do.

His parents believe the incident could have been Richard acting out, as he had just returned from a deployment in Qatar. They believe he may have been struggling to adjust.

Moving forward, the Army has notified government authorities at the U.S. Consulate in Mexico, who have joined in the search, along with the International Police.

Both his family and the Army are working together to bring the 21-year-old home. The Army is offering a $25,000 reward to anyone who finds the missing soldier.