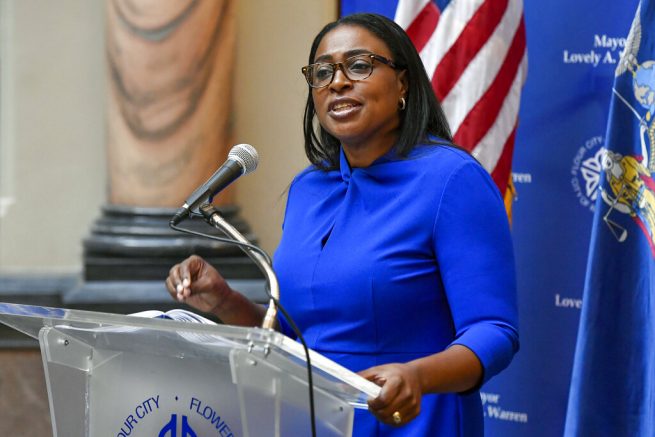 Rochester Mayor Lovely Warren, left, speaks to the media during a press conference in Rochester, N.Y., Thursday, Sept. 3, 2020, where she announced the suspension of officers involved in the death of Daniel Prude. (AP Photo/Adrian Kraus)

The mayor of Rochester, New York is implementing major police reforms amid the unrest in the city. Mayor Lovely Warren announced her plans Sunday in response to several days of Black Lives Matter protests.

Rochester has been in turmoil since authorities released video of the March arrest of 41-year-old Daniel Prude who died one week after he was apprehended. The officers involved have been suspended, but activists are calling for more dramatic changes to law enforcement.

Mayor Warren promised to reallocate funds for other social programs and double the availability of mental health professionals.

“We will fully engage with the race commission and a real rapid response team to further improve our response to health crisis and re-envision our police department,” she stated.

Under the reforms, the Crisis Intervention Team and its budget will reportedly move from the police department to the Youth and Recreation Services Department.

The mayor said the necessary changes won’t happen overnight, but she hopes they will move the community forward in the long run.