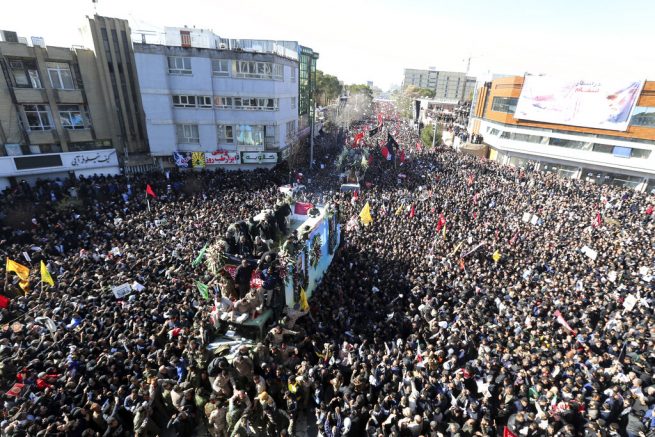 Coffins of Gen. Qassem Soleimani and others who were killed in Iraq by a U.S. drone strike, are carried on a truck surrounded by mourners during a funeral procession, in the city of Kerman, Iran, Tuesday, Jan. 7, 2020. A stampede erupted on Tuesday at a funeral procession. (AP Photo)

Iranian dissidents say the regime is working to draw tens of thousands of people to convince the world Soleimani was a popular leader in Iran. This effort led to dangerous overcrowding at his funeral ceremony in the city of Kerman Tuesday.

At least 32 people died and 190 others were injured in the stampede.

“We can’t really say how may people really loved him. Don’t forget, in the past few days, the government shut down the schools, universities, theentire country is shut down. So if I’m a student, I remember when I was in Iran, if there was any ceremony my teacher would come say ‘all of you tomorrow will come, cross your name.”  –Jiyar Gol, political observer

At least 35 killed and 48 more wounded in a stampede in Soleimani funeral procession in the city of #Kerman in #Iran, officials confirmed. pic.twitter.com/hGDVDGuqCk

Many Iranians on social media are comparing the commemorations for Soleimani to the funerals of leaders of the Third Reich and Soviet Union.