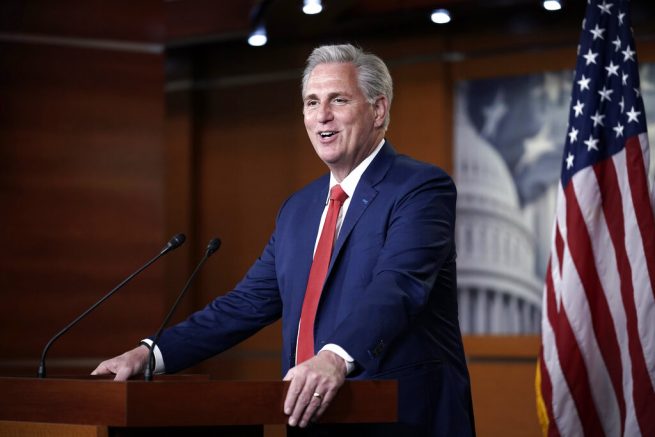 House Minority Leader Kevin McCarthy, R-Calif., gives his assessment of the GOP’s performance in the election as he speaks with reporters at the Capitol in Washington, Wednesday, Nov. 4, 2020. (AP Photo/J. Scott Applewhite)

House Republican leader Kevin McCarthy said the Democrat Party has failed to meet its expectations of victory in this year’s elections. On Wednesday, he told reporters the GOP is projected to pick up several seats in the House and keep its Senate majority.

McCarthy noted this is because the Democrats wasted their two year majority in the House on “partisan witch hunts” while abandoning the interests of their constituents. The California Republican also said President Trump will win because Democrats don’t represent America any more.

For months pollsters and the media predicted a shrinking Republican coalition. But next year, Republicans will be welcoming dozens more women, minorities, and new members to the House of Reps. https://t.co/OgFXc6JeNF

McCarthy stressed the President will win re-election after every legal vote is counted. Meanwhile, Senate Majority Leader Mitch McConnell said questionable vote counts in several key states are likely to delay the election results and the final decision could be made in the courts.

RELATED: Sen. McConnell: Election may be decided in courts