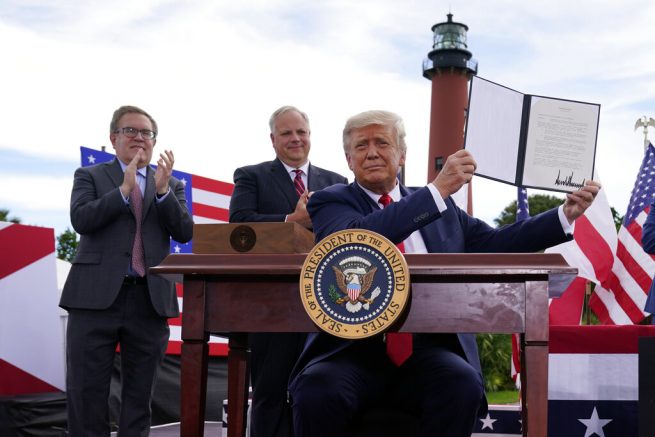 President Trump extended a moratorium on offshore drilling for large swaths off the gulf coast. The presidential order was signed during his visit to Jupiter, Florida on Tuesday.

The order blocks energy companies from drilling off the shores of Florida, Georgia and South Carolina. The moratorium will now last until 2032, marking a decade-long extension to the ban.

In recent years, both Democrats and Republicans have come out against offshore drilling following the devastating Deep Water Horizon oil spill of 2010.

President Trump said he’s deeply committed to preserving the environment and protecting the citizens of Florida.

“Environmental protection is a sacred obligation and so, it is our duty to fight for the dreams and livelihoods of the citizens we serve,” he stated. “And to the citizens of Florida that I know so well and that I love, this is my home. ”

President @realDonaldTrump announces he will extend and expand the moratorium on offshore drilling on Florida’s coasts pic.twitter.com/zKxcLwzPQs

“The approach of Joe Biden and the radical left is exactly the opposite,” he stated. “Their policies will destroy jobs, cause energy prices to double and triple and quadruple, to skyrocket beyond belief and the environment will badly hurt if you go by that.”

The presidential race in Florida is currently neck-and-neck with a Marist-NBC poll Tuesday showing Biden and President Trump both raking in 48-percent support.