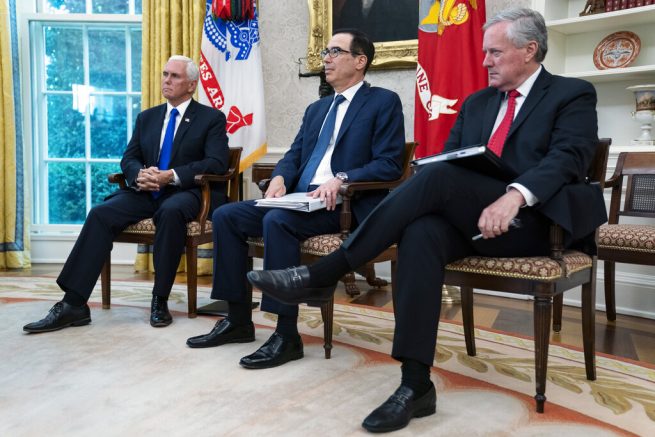 Top GOP leaders are kicking off negotiations for the next stimulus package as relief funds are set to expire at the end of the month.

One of President Trump’s key points was implementing a payroll tax cut, which he said must be in the bill.

“It’s a big saving for the people, it’s a tremendous saving, and I think it’s an incentive for companies to hire their workers back and to keep their workers,” stated the president. “The payroll tax cut to me is very important, we’re working on it.”

Meanwhile, McConnell’s $1 trillion plan includes funding to bolster testing. His package sets aside $75 billion for states to reopen schools and funds for another round of stimulus checks for Americans.

“We don’t need an epidemic of lawsuits on the heels of the pandemic we are already struggling with,” stated the Kentucky Republican. “Kids in school, jobs and pandemic health care is the theme of the proposal that we hope to come together and present to our Republicans.”

Mnuchin said the theme of the package should focus on developing a vaccine, reopening schools and getting Americans back to work. He said the administration plans on creating a vaccine by the end of the year.

America's researchers are the brightest minds in the world, and we are developing a Victory Vaccine faster than ever. We cannot allow our innovation to be exploited by China, Russia, or anyone else.

The challenge will now be for Republican leaders to get Democrat lawmakers on board.