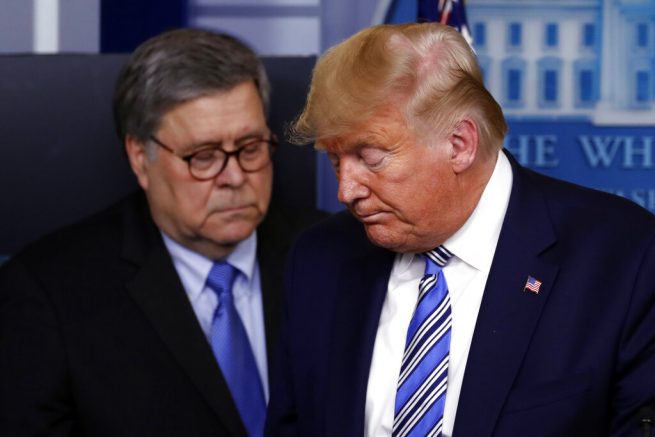 FILE – In this March 23, 2020, file photo President Donald Trump moves from the podium to allow Attorney General William Barr to speak about the coronavirus in the James Brady Briefing Room in Washington. (AP Photo/Alex Brandon, File)

President Trump has called on Attorney General William Barr to speed-up the Justice Department’s investigation into the origins of the Russia probe.

In an interview Thursday, the President said Barr may go down in history as a disappointment for his reluctance to prosecute members of former President Obama’s administration over their roles in the investigation.

Earlier this week, the President sent out multiple tweets asking why there haven’t been any major prosecutions in the probe led by Inspector General John Durham.

Where are all of the arrests? Can you imagine if the roles were reversed? Long term sentences would have started two years ago. Shameful! https://t.co/w2s8LdiRu0

So far, there has only been one criminal case as a result of the investigation with former FBI lawyer Kevin Clinesmith pleading guilty in August to altering a government email about a former Trump campaign adviser.

Obama, Biden, Crooked Hillary and many others got caught in a Treasonous Act of Spying and Government Overthrow, a Criminal Act. How is Biden now allowed to run for President?

However, it’s still unclear what will be contained in Durham’s report or even when it’s set to be released. According to reports, however, Justice Department officials have been hoping it will be done before Election Day as they worry the probe will be closed if Joe Biden is elected.

Democrats have attempted to derail efforts to get the report out before November 3 by claiming it is politically motivated. Barr has addressed those concerns by saying he doesn’t believe a potential release of the report would have an impact on the race.

“As I’ve already said, I’m conscious of the election and I don’t think any of the things that are being worked on are going to have an adverse effect on that,” stated the sttorney general. “I also think there’s strong public interest involved as well.”

President Trump has also stated Biden should not have been able to run for the presidency due to his alleged involvement in the Russia collusion scandal.