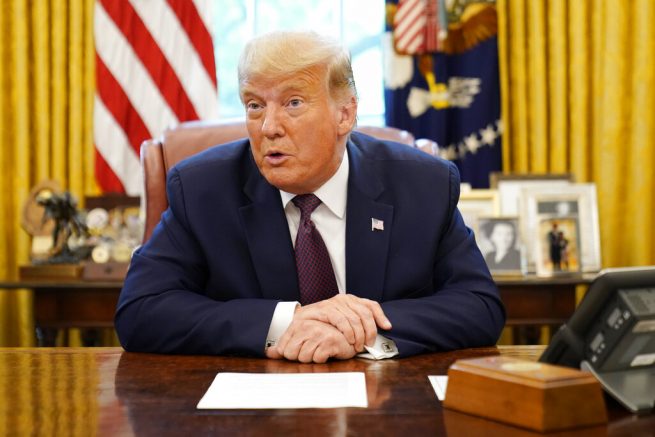 President Donald Trump speaks in the Oval Office of the White House on Friday, Sept. 11, 2020, in Washington. (AP Photo/Andrew Harnik)

President Trump has announced a new peace agreement between Bahrain and Israel. On Twitter, the President wrote, “Our two great friends, Israel and the Kingdom of Bahrain, agree to a peace deal, the second Arab country to make peace with Israel in 30 days.”

Another HISTORIC breakthrough today! Our two GREAT friends Israel and the Kingdom of Bahrain agree to a Peace Deal – the second Arab country to make peace with Israel in 30 days!

He also released a joint statement, in which he confirmed both regions agreed to the establishment of full diplomatic relations. According to the statement, leaders from the two countries will meet in Washington next week to sign the historic peace accord.

Joint Statement of the United States, the Kingdom of Bahrain, and the State of Israel pic.twitter.com/xMquRkGtpM

President Trump spoke more on the deal at the White House.

“This is a truly historic day,” he stated. “This is now the second peace agreement that we have announced in the last month.”

He added, “I am very hopeful that there will be more to follow.”

The President has said Bahrain and Israel will exchange embassies and ambassadors, begin direct flights between their countries, and launch cooperation initiatives across a broad range of sectors, including health, business, technology, security and agriculture.