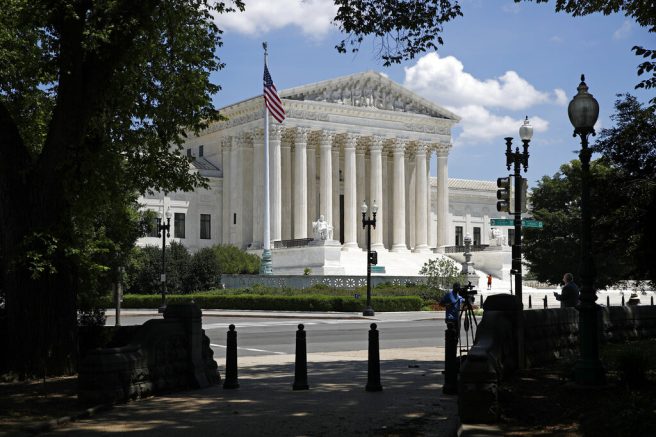 FILE – In this June 29, 2020, file photo, the Supreme Court is seen on Capitol Hill in Washington. (AP Photo/Patrick Semansky, File)

President Trump unveiled 20 potential candidates he would consider to nominate to serve on the Supreme Court.

During a White House press briefing Wednesday, the president said he was “honored to present the names of 20 incredible people” on the list, including Sen. Josh Hawley (R-Mo.), Sen. Tom Cotton (R-Ark.) and Sen. Ted Cruz (R-Texas). Also included on the list are at least five current or former members of the president’s administration.

The three high-profile senators had varying responses to the announcement on social media. Sen. Cruz said it was “humbling and an immense honor to be considered for the Supreme Court.”

It's humbling and an immense honor to be considered for #SCOTUS.

Read my statement here on @realDonaldTrump’s list of potential Supreme Court nominees he announced today he might choose from in a second term.👇 pic.twitter.com/oOjuCHSs80

Similarly, Sen. Cotton released a statement saying he is “grateful for the president’s confidence” and consideration. In a bold move soon after, Cotton tweeted “it’s time for Roe v. Wade to go” and “the First Amendment protects your right to worship.”

Meanwhile, the president received a “thanks, but no thanks” from Sen. Hawley. He said while he “appreciates the president’s confidence” in him as a potential Supreme Court nominee, he’s not interested in serving on the high court.

Despite much attention being placed on those higher profile names on the list, President Trump said all of the candidates are “outstanding people” and reiterated the importance of this kind of decision. He then slammed Democrat presidential nominee Joe Biden for not putting out his own nominee list. The president said he believes Biden is scared the picks would be “too far left.”

“Joe Biden has refused to release his list, perhaps because he knows the names are so extremely far left that they could never withstand public scrutiny or receive acceptance,” stated President Trump. “He must release a list of justices for people to properly make a decision as to how they will vote, it is very important that he do so.”

Presidential nominees are shifting their focus on the Supreme Court following a year of multiple hospitalizations for Justice Ruth Bader Ginsberg, who at 87 is the oldest serving justice on the court.

In response to the new potential Supreme Court nominees, Vice President Mike Pence posted a clip of him speaking about the nation’s highest court at a Susan B. Anthony fireside chat in Pennsylvania.

We need more Conservatives on the Supreme Court of the United States! pic.twitter.com/7ikZWw3zEF

President Trump has already announced 25 other potential nominees during his first term, which is a stark contrast from his Democrat opponent who’s only promise on the matter so far is to appoint a black woman to the high court if the chance presents itself.