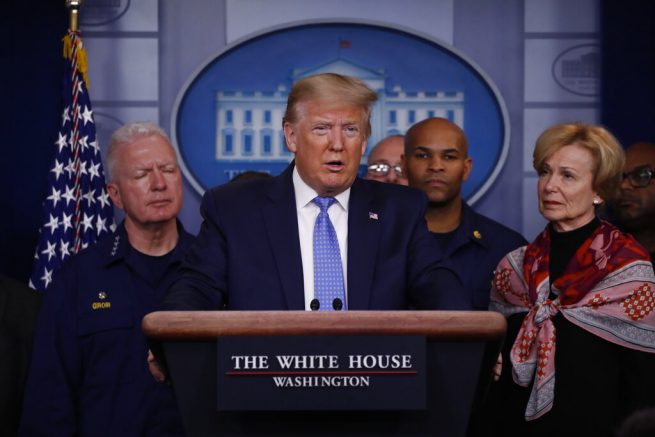 President Donald Trump speaks during a briefing about the coronavirus in the James Brady Press Briefing Room of the White House, Sunday, March 15, 2020, in Washington. (AP Photo/Alex Brandon)

President Trump has urged Americans to “relax” amid the coronavirus outbreak. During a White House briefing Sunday, he advised Americans to stop buying supplies in bulk and reaffirmed that companies are committed to “meeting the needs of the public.”

According to the president, grocery stores across the nation are working around the clock to keep stores stocked.

America's retailers are working hard to keep food and essentials stocked for the American public, and there is no need to hoard products.

"They have it totally in hand," President @realDonaldTrump said. pic.twitter.com/AoRK7IuAKK

He also praised Google for its cooperation and its efforts to combat COVID-19.

Pres. Trump holds up a printout of Tweets from Google confirming they are making a website to assist with the government’s #COVIDー19 response, then flicks the paper to the floor. pic.twitter.com/rpciWIvlN4

The president went on to say “we have tremendous control” of the virus and added he is “very happy” with where the U.S. stands. He also highlighted his administration’s work with state and local authorities to stave off the spread of the virus.

He recently touted his early decision to halt all travel from China, which he noted has prevented multiple cases of the virus in the U.S. and saved many lives.

….The USA was never set up for this, just look at the catastrophe of the H1N1 Swine Flu (Biden in charge, 17,000 people lost, very late response time), but it soon will be. Great decision to close our China, and other, borders early. Saved many lives! 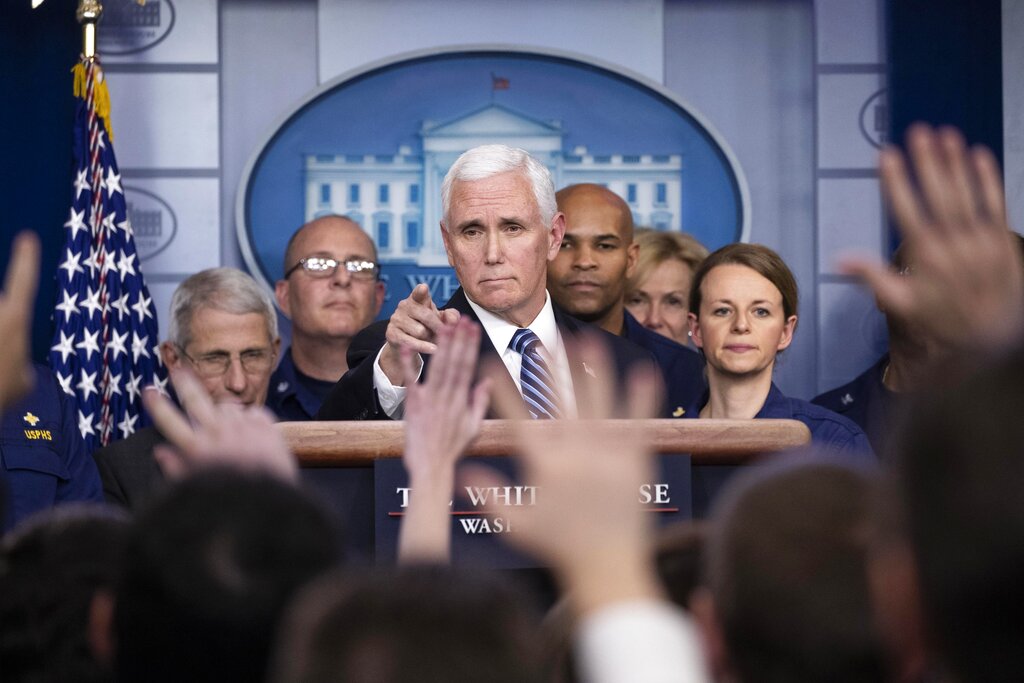 Vice President Mike Pence points to a question as he speaks during a briefing about the coronavirus in the James Brady Press Briefing Room of the White House, Sunday, March 15, 2020, in Washington. (AP Photo/Alex Brandon)

Earlier in the day, President Trump spoke with top grocery executives regarding the recent spike in panic buying. He spoke with them over the phone to discuss supply shortages and possible aid strategies.

Earlier today, President @realDonaldTrump held a phone call with more than two dozen grocery store and supply chain executives, who are working hand-in-hand with Federal, state, and local officials to ensure food and essentials are constantly available to the American people.

According to White House spokesperson Judd Deere, the president thanked them for the work they’ve done to meet the needs of the public. Deere stated the executives are coordinating with the federal government, as well as state and local leaders, to ensure food and essentials are constantly available.

The spokesman also noted supply chains in the U.S. remain strong, making it unnecessary for the public to hoard daily essentials.

Today, @realDonaldTrump held a call with more than two dozen grocery store and supply chain executives. All of the executives are working hand-in-hand with the Federal Government, as well as State and local leaders, to ensure food and essentials are constantly available. pic.twitter.com/pgkJs44Dmu 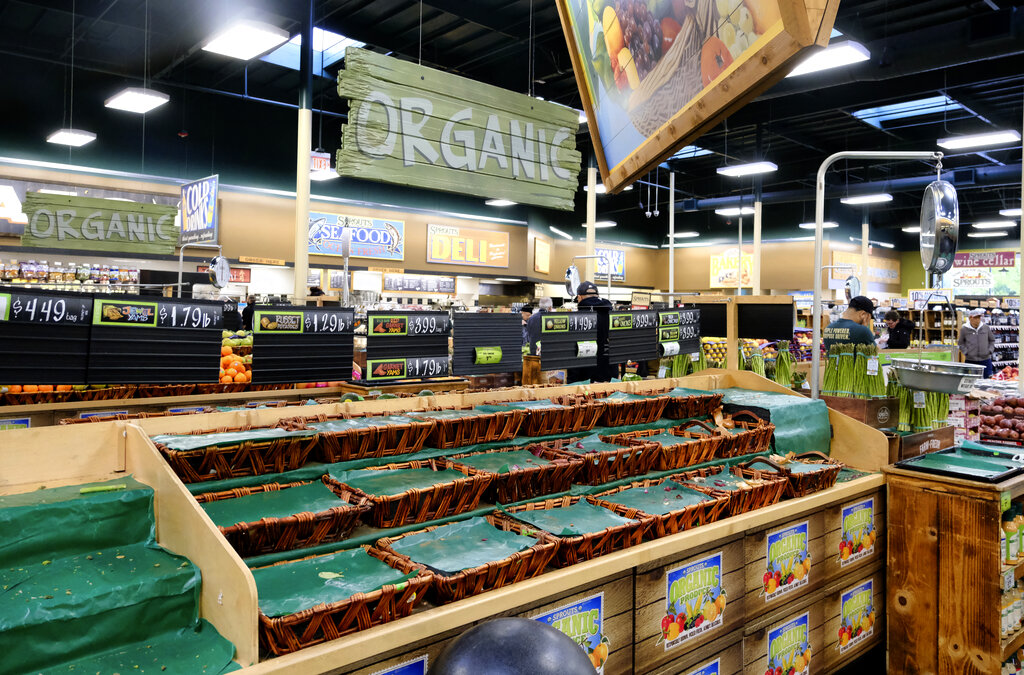 A produce section of a produce market is picked clean after panicked shoppers swept through stocking up on supplies in fear of the coronavirus at a local grocery store in Burbank, Calif. on Saturday, March 14, 2020. (AP Photo/Richard Vogel)

Over the past few weeks, supermarkets across the nation have seen an influx of customers and a demand for certain goods, including food, water, cleaning supplies and toilet paper.

From my brother in SoCal: here’s a line over a half-mile long just to get inside Costco pic.twitter.com/tZj9P60OtB

Some grocery stores have even ramped up private security on site as an extra precaution.

73 people lined up to get groceries 7am Security presence at the market. Breakfast bring on #virtualMonday pic.twitter.com/32MVr8wV1G

Representatives from Walmart, CVS, Walgreens and others have been working closely with the White House in recent weeks. The president has reassured Americans that the government will “unleash every authority, resource and tool at its disposal to safeguard the lives and health of our people.”

Richard Ashworth, @Walgreens: "We're happy to stand in here and help in communities all across America … We look forward to partnering with the CDC, the Administration, HHS, and the task force, and specifically to the Vice President, who’s doing such a fantastic job." pic.twitter.com/eRmpiw15Lr 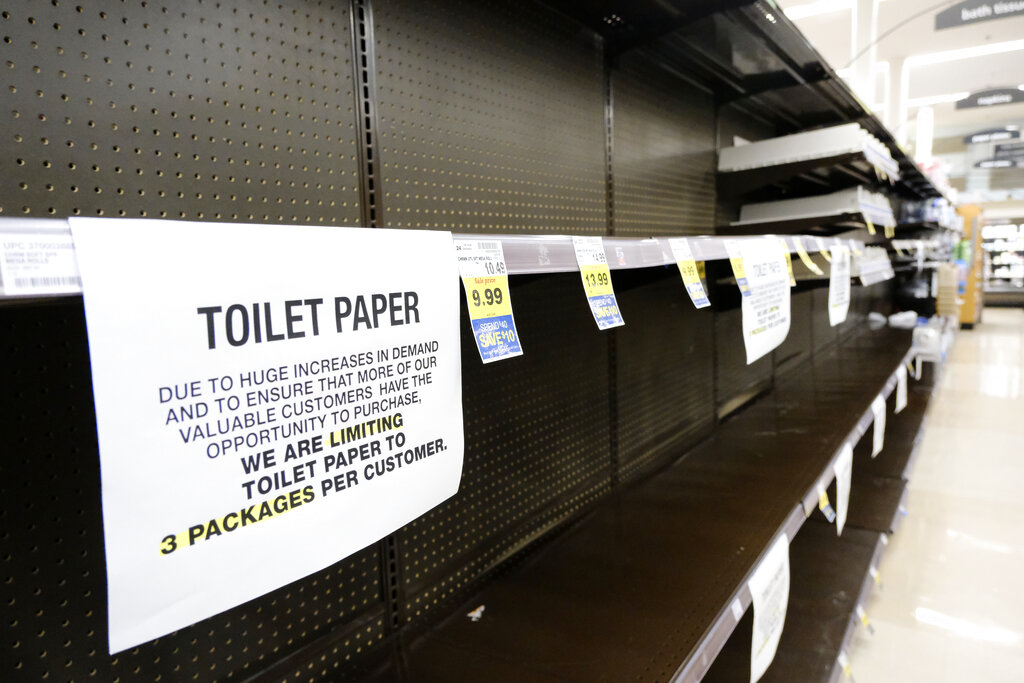 A notice limiting only 3 packages of toilet paper per customer is displayed on picked bare shelves after shoppers cleaned out the stock of paper and cleaning products at a local grocery store in Burbank, Calif. on Saturday, March 14, 2020. (AP Photo/Richard Vogel)

On Sunday, President Trump also highlighted his latest effort to stop the coronavirus outbreak with an increase in health screenings at airports. The president took to Twitter, saying recent delays and interruptions in several airports have happened due to medical screenings.

He emphasized the inconvenience is necessary to ensure safety of all passengers. President Trump reassured travelers that transportation officials are moving as quickly as possible to reduce bottlenecks at airports. He added that everyone must be vigilant and careful to reduce the risks posed by the virus.

We are doing very precise Medical Screenings at our airports. Pardon the interruptions and delays, we are moving as quickly as possible, but it is very important that we be vigilant and careful. We must get it right. Safety first! 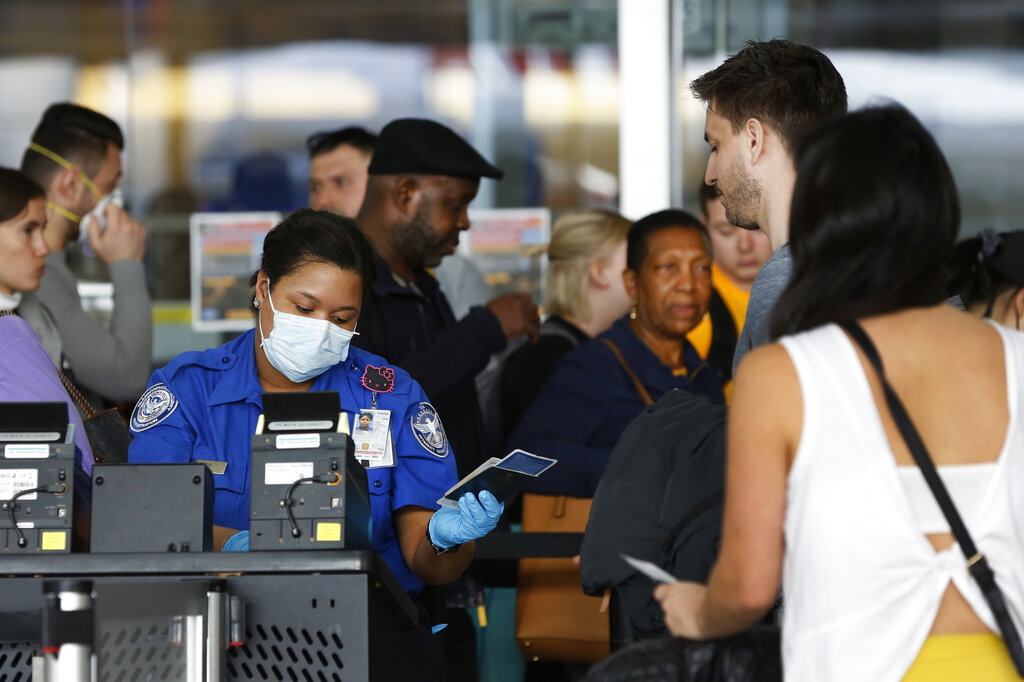 FILE – In this Saturday, March 14, 2020 file photo, a Transportation Security Administration agent hands a passport back to a traveler as she screens travelers, at a checkpoint inside an airline terminal at John F. Kennedy Airport in New York. (AP Photo/Kathy Willens, File)

International tourists in the U.S. have also questioned how they will return to their home countries as the White House limits flights.

President Trump has reassured citizens and travelers that his administration is working hard to “get the job done properly.”

….The USA was never set up for this, just look at the catastrophe of the H1N1 Swine Flu (Biden in charge, 17,000 people lost, very late response time), but it soon will be. Great decision to close our China, and other, borders early. Saved many lives! 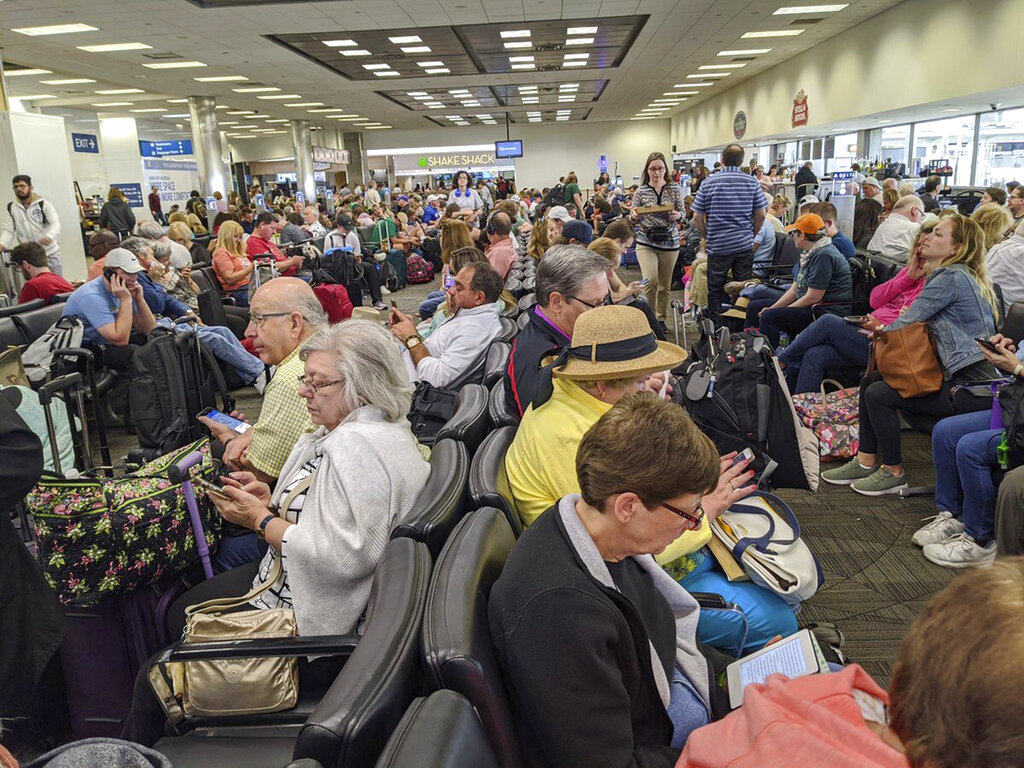