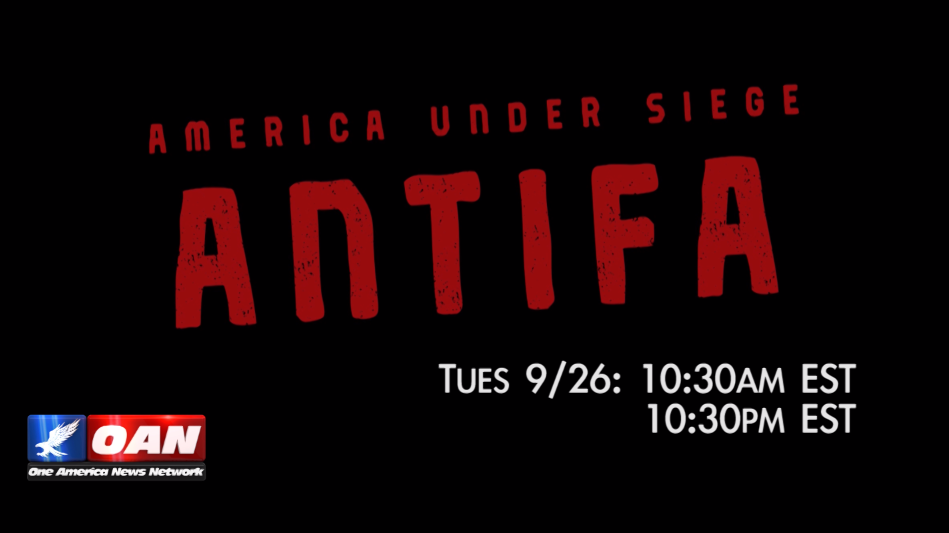 One America News Network To Air “America Under Siege: Antifa”, A Film Scheduled To Debut At UC Berkeley Free Speech Week Prior To Cancellation Due To Antifa Threats

San Diego, CA – September 25, 2017 – With Free Speech Week at UC Berkeley cancelled due to threats of violence by Antifa, national cable news channel, One America News Network, will be extending broad, national exposure to the documentary film “America Under Siege: Antifa”, a documentary film that was scheduled to debut tonight, at the beginning of the week long free speech event on the UC Berkeley campus.  One America News Network has extended a prime time debut to the documentary film this Tuesday night at 10:30 pm EST, 7:30 pm PST.  A sneak preview will air earlier in the day on Tuesday, at 10:30 am EST, 7:30 am PST.

“Free speech is at the heart and soul of our country’s foundation.  It is a national tragedy and an embarrassment to the long legacy of free speech on the campus of UC Berkeley for a group like Antifa to shut down Free Speech Week using the threat of violence,” stated a One America News Network spokesperson.  The national cable news network is also offering to extend airtime to any speaker who was scheduled to address students during Free Speech Week.

According to Jake Klein founder of Dangerous Documentaries, which produced the documentary film, “America Under Siege: Antifa” delves into the origins and goals of the radical Antifa movement. While Antifa has garnered significant media coverage in recent weeks, very few Americans truly understand the movement’s motivations and history. Our new film represents the most in-depth look yet at America’s most infamous modern-day movement and its disturbing impact on American society.”

About One America News Network is a dependable and reliable source of credible national and international news 24/7.  The network provides 21 hours of live news coverage every weekday plus two one-hour political talk shows, namely The Daily Ledger and Tipping Point with Liz Wheeler. While other emerging and established cable news channels offer multiple hours of live news coverage, only OAN can claim to consistently provide 21 hours of live coverage every weekday.  For more information on One America News Network, please visit www.OANN.com.