With an impressive and long list of exclusive one-on-one interviews, Michael Caputo reports that America’s Ukraine problem didn’t start with a telephone call between President Donald Trump and Ukrainian President Volodymyr Zelensky. In fact, it started years before when America meddled in Ukraine’s elections,130 people were assassinated – and Ukraine then interfered in our presidential elections. 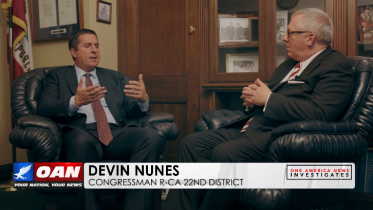 Prominently featured in the special is the Maidan Massacre, which led to the overthrow of former President Viktor Yanukovych in 2014 – a mass murder still unsolved in Kyiv. Caputo reports that Western and Russian diplomats fueled that bloody coup, from which former Vice President Joe Biden emerged as the American viceroy of Ukraine. As a result, his son Hunter became fabulously wealthy from the nation’s corrupt gas company, Burisma Holdings.

Ukrainian political leaders interviewed in the program insist the Biden-Burisma gambit was a get-rich-quick scheme that the Ukrainian people find transparently corrupt.

Hear from Andrii Telizhenko, a former diplomat at the Ukrainian Embassy in the United States, as he explains how the Obama administration coaxed the government of then-President Petro Poroshenko into interfering in America’s 2016 elections, with meddling by a Ukrainian member of parliament and their Ambassador to the US – all on the instruction of Poroshenko.

“Michael’s in-depth investigative work with extensive, exclusive interviews to reveal the real story is exactly what our One America News Investigates series is all about,” said Robert Herring, Sr., CEO of One America News Network.  “The series shines light on facts that have been suppressed to fit favored political narratives and coverup wrong-doing.”

Caputo has authored a deeply detailed book on the topic, set for publication by Bombardier Books on March 1, 2020: “The Ukraine Hoax: How Decades of Corruption in the Former Soviet Republic Led to Trump’s Phony Impeachment.” A regional specialist with family and history in Ukraine, Caputo served as an advisor on the 2016 Trump campaign and was swept up in the resulting Russia investigations by the US Congress and Special Counsel Robert Mueller. He was never accused of a crime, nor called as a witness in related criminal trials.