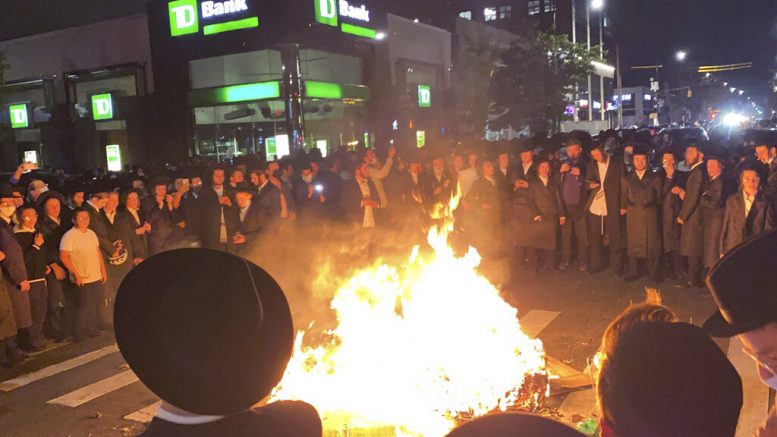 Members of the Orthodox Jewish community surround a rubbish fire in the street, Tuesday, Oct. 6, 2020, in the Borough Park section of the Brooklyn borough of New York. Hundreds of Orthodox Jewish men gathered in the streets of Borough Park after New York Gov. Andrew Cuomo moved to reinstate restrictions on houses of worship, schools and businesses in areas where coronavirus cases are spiking. (Joe Marino/New York Post via AP)

After news broke he was a suspect, a chaotic scene erupted outside the journalist’s home Sunday night. This came after a fan account for Tischler tweeted out the reporter’s address and encouraged people to organize outside his house.

The New York City Police Department Warrant Squad has taken Harold "Heshy" Tischler into custody. He will be charged with inciting to riot and unlawful imprisonment in connection with an assault of a journalist that took place on October 7, 2020 in Brooklyn. pic.twitter.com/cLkfcBpZUu

Last week, the Orthodox Jewish journalist said he was assaulted by a group of men in Bourough Park in Brooklyn, which is one of the state designated ‘red zones’ with tight COVID-19 restrictions. The attackers allegedly suspected Kornbluh of reporting restriction violations to police.

Kornbluh alleged Tishcler, who is also Orthodox and a former candidate for the Brooklyn City Council, recognized him among the crowd and directed others to chase him down the street. Meanwhile, Mayor Bill de Blasio called the attack unacceptable.

“Here’s a journalist, a journalist who really cares about doing the work of informing people of what’s going on, and here’s a mob of people attacking him,” he stated. “It’s just unacceptable.”

However, Tischler has deniesd any wrongdoing and continues to maintain his innocence. The 56-year old activist is an outspoken critic of COVID-19 social distancing measures and lockdowns. He faces charges of inciting to riot and unlawful imprisonment.