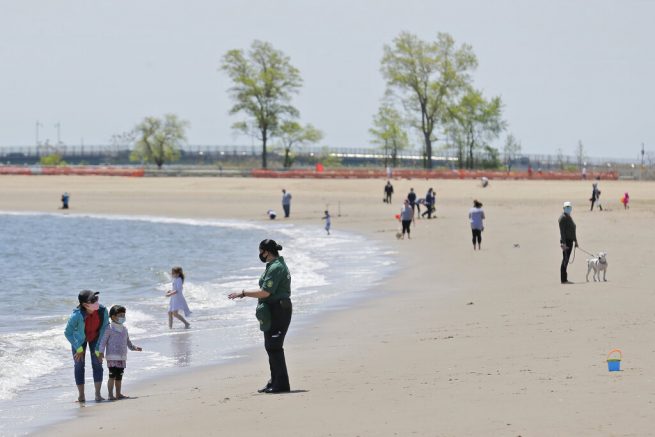 A security guards asks people to not swim while patrolling at Orchard Beach in the Bronx borough of New York, Sunday, May 17, 2020. (AP Photo/Seth Wenig)

New York City Mayor Bill de Blasio has confirmed city beaches will not be open for Memorial Day. On Sunday, the Democrat mayor said it is not safe to open the beaches because New York is still the “epicenter of the crisis.”

However, his remarks came just days after Governor Andrew Cuomo announced some beaches outside the city can reopen for the holiday.

The mayor has said he fears opening too quickly will increase the number of confirmed coronavirus cases.

“So, there’s obviously a huge interest in the beaches and the State of New York has said that different localities can make different choices. Some are deciding in the metropolitan area to open beaches for Memorial Day, the traditional start of the beach season. I’ve said before, I’m going to say again: we are not opening our beaches on Memorial Day. We are not opening our beaches in the near-term, it is not safe.” – Bill de Blasio, Mayor of New York City

BUT we’re holding out hope we’ll make the progress we need beating this disease back so we can open later this summer. We’re training lifeguards so if and when it’s safe to reopen beaches, we’ll be able to do so.

De Blasio was unable to provide a definitive timeline of when New Yorkers can expect the beaches to open back up, but he added officials will take it “a day at a time.”