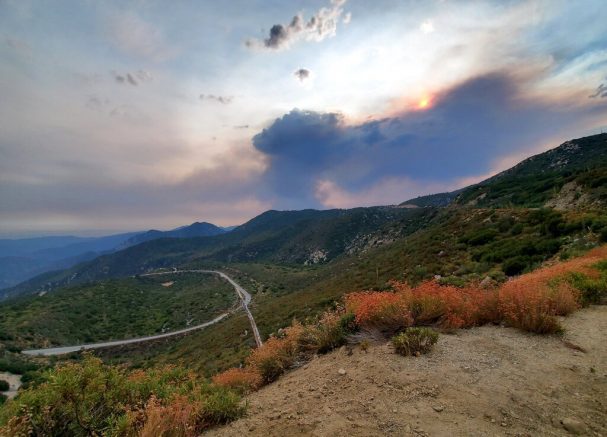 Smoke from the Bobcat Fire is seen from California State Highway 39 in Azusa, Calif., Sunday, Sept. 6, 2020 The heat wave was expected to spread triple-digit temperatures over much of California through Monday. Temperatures in the San Fernando Valley area of Los Angeles reached 116 degrees (46 Celsius) for the second day in a row, forecasters said. (AP Photo/Christian Monterrosa)

Containment efforts have continued for the ‘Bobcat Fire’ in Los Angeles. The blaze prompted more evacuations in the Antelope Valley area Thursday, which is about 85 miles north of Los Angeles.

Officials also lifted evacuation orders that were activated in nearby Arcadia on Wednesday.

Firefighters were successfully able to steer the flames away from the historic Mount Wilson Observatory in northeast Los Angeles by using controlled burning.

We give our sincerest thanks to the firefighters who are on the ground defending our observatory as well as the pilots flying aircraft for fire suppression. Here’s a picture from of firefighters crossing the "Einstein Bridge" from the 100-inch dome. #BOBCATFIRE pic.twitter.com/yrbLPtnhJh

The fire near the observatory was also threatening to destroy nearby broadcast towers that were valued around $1 billion.

“It has gone around Mount Wilson, it is heading to the northwest,” announced Red Cross Press Information Officer Larry Smith. “Although, it has bumped 39 over on the northeast side and has actually crossed the two as well on the north.”

Around 1,200 personnel have been deployed to combat the fire. So far, the blaze has burned more than 50,000 acres and is 3-percent contained.

#BobcatFire At Mt. Wilson, isolated patches of the fire ran up towards the compound, however, firefighters’ containment lines continue to hold. Meanwhile, firefighters in the Monrovia area, reinforced containment line and ensured the previous day’s burning operation had cooled. pic.twitter.com/Qd584eJs5z