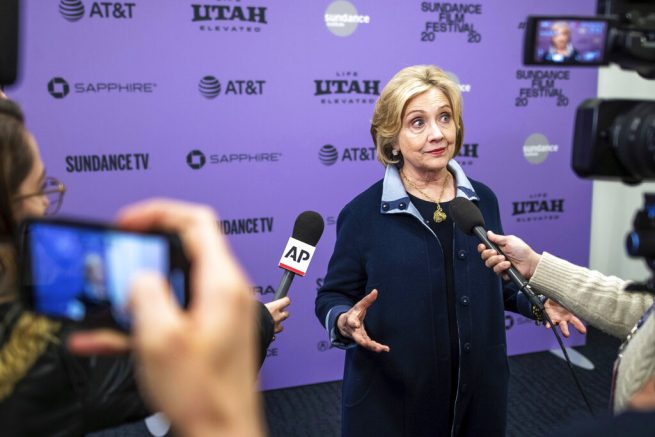 Hillary Clinton attends the premiere of “Hillary” at The Ray Theatre during the 2020 Sundance Film Festival on Saturday, Jan. 25, 2020, in Park City, Utah. (Photo by Charles Sykes/Invision/AP)

Hillary Clinton recently weighed in on President Trump’s acquittal on both articles of impeachment. While speaking during an interview with talk show host Ellen DeGeneres Thursday, the twice failed presidential contender said she was disappointed by the Senate’s vote to acquit the president during the impeachment trial.

I happened to be booked on @TheEllenShow the day of Trump's impeachment vote. Here were my thoughts. https://t.co/vr8tSPBbZ5

Clinton went on to praise Sen. Mitt Romney’s (R-Utah) decision to vote against party lines in opposition to the president and called his speech on the Senate floor “extraordinary.”

“I wasn’t surprised because it’s hard to get 67 votes to convict and remove somebody, but I was still disappointed that not more of the Republicans were not willing to take the stand that Mitt Romney took,” she stated.

Clinton added, it is now time for Americans to “pay attention” and hold President Trump accountable by voting him out of the White House in November.

As the president's impeachment trial began, Republican senators pledged an oath to defend the Constitution.

Today, 52 of them voted to betray that oath—and all of us.

We’re entering dangerous territory for our democracy. It’ll take all of us working together to restore it.

RELATED: President Trump celebrates his acquittal at the White House