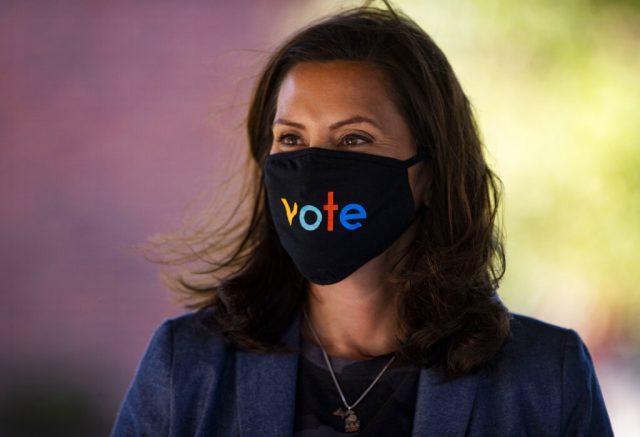 Michigan Gov. Gretchen Whitmer wears a mask with the word “vote” displayed on the front during a roundtable discussion on healthcare, Wednesday Oct. 7, 2020, in Kalamazoo, Mich. (Nicole Hester/Ann Arbor News via AP)

Michigan Gov. Gretchen Whitmer (D) said election results will not be counted by Election Day. During an interview on Sunday, she slammed the deadline by claiming it was artificial and imposed from people with a political agenda.

The Democrat governor failed to give an ETA of when officials would announce the results and stressed it wouldn’t be too far off from when polls close. Whitmer went on to say her administration is focused on running a smooth and safe election.

You can register to vote by going to https://t.co/ADbpFJrMUd and completing the online form (if you have a MI driver’s license or state ID). You can also mail the form it to your clerk or register in person in your clerk’s office. #MIPlan2Vote pic.twitter.com/XCTIU12QAN

Whitmer said as long as ballots are postmarked by November 3, officials will count the ballots. She’s confident in her administration’s ability to squash possible voting fraud and that Michiganders will turnout to vote in historic proportions.