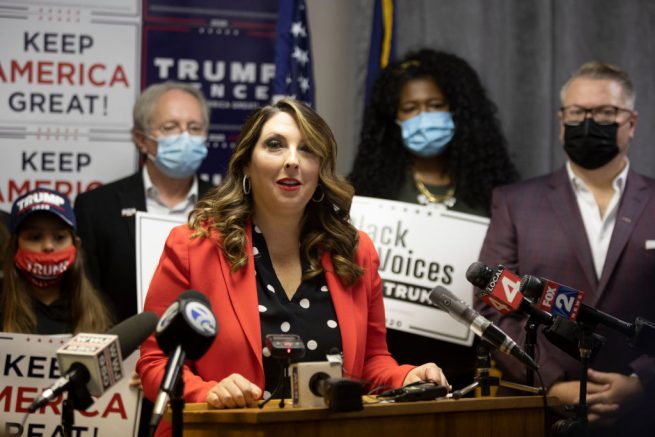 Republican National Committee Chairwoman Ronna McDaniel speaks during the Trump Victory press conference on November 6, 2020 in Bloomfield Hills, Michigan. McDaniel spoke about the status of the election and intentions of pursuing allegations of ballot mishandling in Michigan and across the country. (Photo by Elaine Cromie/Getty Images)

GOP leaders in Michigan are working to sort-out voter irregularities in the 2020 presidential race.

The RNC announced they are investigating allegations of voter fraud in multiple states. In a press release Friday, GOP Chairwoman Ronna McDaniel stated the RNC will probe issues with vote counting and tabulation, wanting to preserve the integrity of the election process.

“Today we announce the RNC has deployed legal teams in 4 states, including Michigan, to investigate clear irregularities with vote counting and tabulation in those states,” McDaniel said. “They will work with state and local authorities to ensure that a legal count is conducted in accordance with each state’s laws and that every vote is counted.”

We have documented irregularities in Michigan.

In Wayne County, poll watchers were kept in the dark with blocked windows & padlocked doors.

At the TCF Center, a whistleblower said their supervisor asked them to illegally put dates on ballots. pic.twitter.com/VX5Lt0MYuK

The chairwoman went on to further slam the mainstream media for calling some battleground states too early and stated they acted hastily and were irrational.

She also brought up claims of Michigan poll watchers being denied entry into vote-counting centers while having their visibility blocked from the inside.

One report stated Democrat election officials used pizza boxes and cardboard in order to cover up the windows of the counting center.

“Republican poll-watchers were denied their legal right to monitor the election and purposely kept in the dark, both literally and figuratively, with poll workers blocking windows and padlocking doors,” McDaniel stated. “There are hundreds of reports of our poll-watchers being intimidated, unable to do their job.”

McDaniel concluded her remarks by urging Democrats to join Republicans in ensuring the integrity of this presidential election, calling for bipartisanship when determining election law.