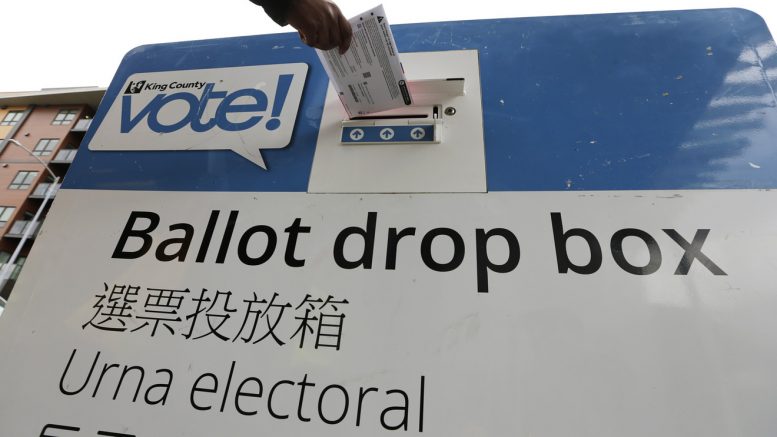 File – A voter drops off a ballot in the Washington state primary last month. (AP/Photo)

The fight over absentee ballots is heating up in the Lone Star state as a court grants a request to pause efforts to extend vote-by-mail eligibility.

Wednesday’s decision reversed a ruling made the day earlier by a U.S. district judge in San Antonio that said fear of contracting coronavirus should be considered a “disability” and therefore make a voter eligible to vote by mail.

State Attorney General Ken Paxton said the current definition of disability should not extend to those who are just concerned about sickness. The circuit court is now considering whether to nullify the earlier ruling permanently.

Meanwhile, Paxton appeared before a virtual meeting of the Texas Supreme Court Wednesday to request the ability to restrict election officials from sending absentee ballots to voters who cite coronavirus concerns.

Current state law requires people under the age of 65 to provide an “excuse” like a disability when requesting an absentee ballot. However, the court was skeptical. It pointed out that a voter does not have to provide details of their disability and the excuse does not have to be verified in order to receive a ballot.

County representatives from El Paso argued the attorney general was expecting them to “police voter disability claims,” which would violate state and federal law.

The Texas solicitor general eventually conceded election officials were not able to deny an absentee request on the basis of a disability regardless of its relation to the coronavirus.

The Texas Democrat Party has been instructed to respond to the federal ruling by the end of Thursday and the state Supreme Court is likely to release their decision before the mail-in ballot deadline in July.