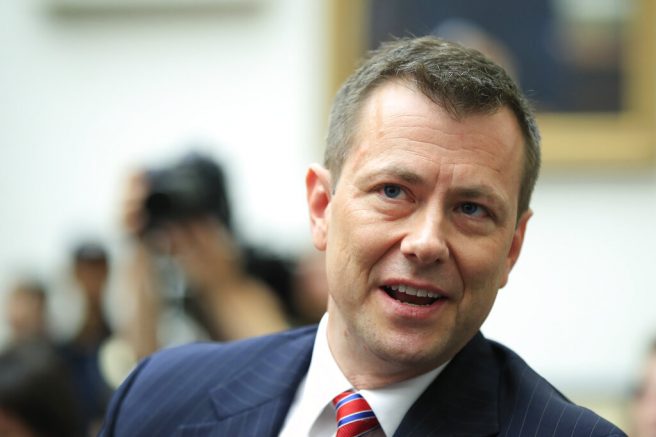 FILE – In this July 12, 2018, file photo, then-FBI Deputy Assistant Director Peter Strzok, waits for the start of a House Judiciary Committee joint hearing on Capitol Hill in Washington. Strzok, a former FBI agent who was fired because of derogatory text messages about Donald Trump, writes in a new book that he believes the president has been compromised by Russia. (AP Photo/Manuel Balce Ceneta, File)

Former FBI agent Peter Strzok has levied new attacks on President Trump after accusing him of being “compromised.”

“I spent over two decades recruiting spies and supervising counterintelligence investigations throughout the United States and around the world,” said Strzok. “There’s nobody who has done that kind of work who does not believe that the president is compromised.”

During an interview while promoting his new book Tuesday, the disgraced former FBI agent attempted to defend the Russia probe by claiming there was evidence foreign agents are influencing the president. He also denied the probe was motivated by an anti-Trump bias despite his texts to Lisa Page showing otherwise.

“Look, every agent has their own opinion, I have my own personal opinion as well,” Strzok stated. “Every day, though, around the United States, government employees walk into their jobs and they leave their political opinions at the door…they do their job like I did my job, objectively, independently and in pursuit of the truth. ”

The White House said Strzok is a disgruntled employee who was fired for his lack of professionalism. Officials also noted that his book, title “Compromised, “isn’t worth the paper it’s printed on.”