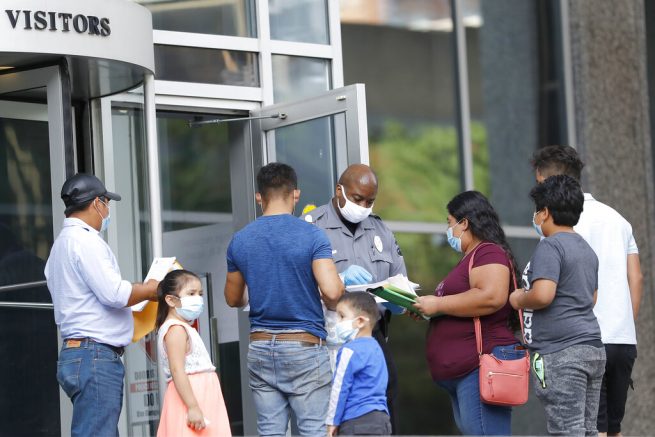 A security officer, center, meets with people outside the federal building to give them a form to return for immigration check-ins at a later date, Monday, July 13, 2020, in Baltimore. (AP Photo/Julio Cortez)

New applications for the DACA program have been labeled “pending” while the White House works to repeal the Obama era program. This came after a federal judge in Maryland demanded the full restoration of the program and its ability to take new applicants.

Last month, the Supreme Court ruled the Trump administration had ended the program improperly and needed a valid reason for doing so.

The president has told program recipients that their status is a top GOP priority.

“Very importantly, we’ll be taking care of people from DACA in a very Republican way. I’ve spoken to many Republicans and some would like to leave it out, but really, they understand that it’s the right thing to do. So, we’re going to be taking care of DACA.” – Donald Trump, 45th President of the United States

He added he intends on signing a new immigration act soon, which would create a new program based on merit.

More than 650,000 people are currently enrolled in the DACA program.