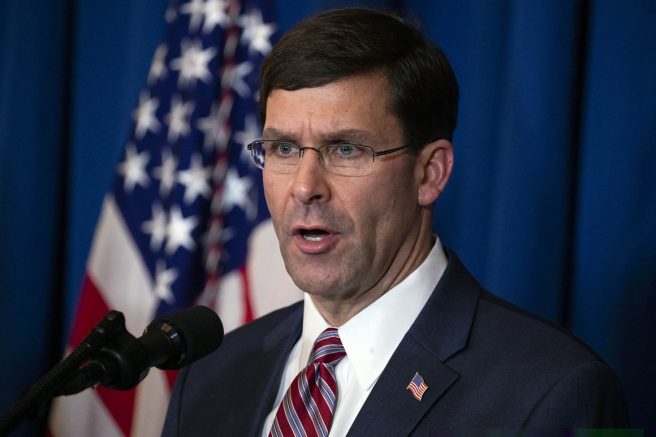 According to the secretary of defense, the U.S. armed forces are at the ready to preserve America’s primacy on the world stage and her ability to defend democratic values as well as inalienable freedoms around the globe.

Mark Esper opened his remarks Thursday at the Heritage Foundation by addressing a fundamental shift in the military’s global strategy after decades of focusing on fighting threats from terrorist organizations and insurgent groups. The conflicts of the 21st Century will likely be characterized by competition with near-peer states.

“Today, our strategic competitors, China and Russia, are attempting to erode our hard-earned gains as they undermine international rules and norms, and use coercion against other nations for their own benefit,” stated the defense secretary. “We continue to see this behavior globally from Beijing’s predatory economics and its aggression in the South and East China Seas to Moscow’s violations of its international obligations and the sovereignty of its neighbors.”

My top priority as SECDEF is the irreversible implementation of the NDS. This strategy guides our work to protect our competitive advantages and defend a free and open global order along three lines of effort: pic.twitter.com/9Lb6YorlXN

Chief among those seeking to destabilize the American-led international system, Esper pointed out, is the People’s Republic of China and one of the armed forces’ primary tasks moving forward will be to counter its expansionist ambitions.

To this effect, Esper reported the Trump administration has initiated a refocusing of the armed forces’ resources with the aim of ensuring maximum readiness against Chinese aggression in much the same way anti-Soviet preparedness was the main strategy of the Cold War.

“Our path forward also relies on service-level training and professional military education that develops the expertise of our force on Chinese military systems, tactics and doctrine much like my generation did when we studied the Soviet armed forces during the Cold War,” the defense secretary explained. “I directed the National Defense University to refocus its curriculum by dedicating 50 percent of the coursework to China by academic year 2021.”

Esper also outlined plans to expand the country’s arsenal, including a plan to increase the size of the Navy’s fleet to 500 ships by 2045, asset acquisitions across all branches of the armed forces and the integration of new platforms to more effectively combat cyber attacks.

In an appeal to lawmakers, Esper stressed the importance of steady financial support. He argued that providing the armed forces with the resources necessary to achieve their mission was of vital national importance.

Lastly, the success of our efforts relies on the support of Congress. In the face of rising strategic threats, we depend on steady fiscal commitments to sustain our current force, and prepare for tomorrow’s challenges. pic.twitter.com/HFh066HZFt

The defense secretary commended the progress made under the Trump administration, which has increased the U.S. military budget by $200 billion a year since 2017. This move has undone years of damage caused by insufficient budgets under previous administrations.

Esper went on to assert that with continued support from the nation’s leaders and the relentless dedication of its service members, the armed forces will be well poised to meet the challenges of a shifting global landscape.

“Simply put, readiness refers to our military’s ability to answer the nation’s call, and to fight and win, anytime, anywhere,” he stated. “The question we must answer is this: if called upon to fight tonight, are we ready?”