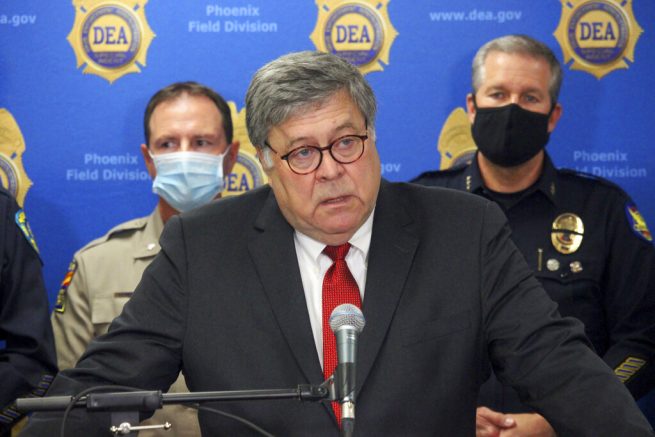 The Drug Enforcement Agency (DEA) has been taking on Mexican drug cartels, which are trafficking in the U.S. The agency recently completed a six-month operation dubbed ‘Crystal Shield.’

While in Phoenix Thursday, Attorney General William Barr said agents seized more than 28,000 pounds of methamphetamine, $43 million in drug money and nearly 300 firearms over the course of the operation.

“The trafficking of methamphetamine poses a major danger to our communities,” Barr stated. “And the federal government is determined to disrupt, dismantle and destroy the violent drug trafficking organizations that place profits over human lives.”

The DEA focused on nine major cities across Georgia, Texas, California, Louisiana and Missouri to track the substances down as well as the traffickers behind them. The initiative resulted in roughly 18,000 arrests with officials noting the drug trade has not seen any slowdown since the coronavirus pandemic.

“We felt like we had to undertake this operation because from 2018 to 2019 the amount of methamphetamine coming in to the United States from Mexico more than doubled,” said Bill Bodner, Special Agent for the Los Angeles DEA. “So, we realized that methamphetamine was flooding the streets and we had to do something about it.”

Attorney General Barr said Mexican cartels are responsible for the majority of methamphetamine that enters the U.S. with domestic seizures increasing every year since 2017. Officials said they expect the number to continue rising until stronger actions are taken against drug gangs.