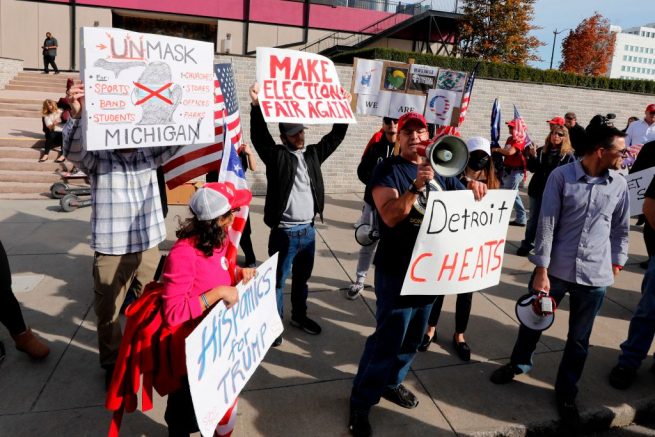 Chris Schornak a supporter of US President Donald Trump speaks outside of the TCF Center to protest the counting of votes for the 2020 general election on November 6, 2020 in Detroit, Michigan. (Photo by JEFF KOWALSKY/AFP via Getty Images)

At least 10,000 deceased people were found to have voted in this year’s election in the state of Michigan.

According to state election data, about 9,500 people who voted this year were officially dead, while another 2,000 were 100-years-old or more. None of these voters were found to be alive through the Social Security Death Index.

Analysts from ‘Big Data Poll‘ said some of these people may have never existed, meaning Michigan Democrats possibly used phony ballots to boost Joe Biden in the election.

The 2020 Trump campaign is now pressing ahead with lawsuits to address voter fraud by Democrats.

The Biden selection by the Crooked Media is based on unlawful votes in PA, Mich, GA, Wisc, Nevada et al.

We will prove it all.

“The Trump campaign is analyzing the voter rolls for people who voted that are dead and we’ll see what that comes up with,” said Sen. Lindsey Graham (R-S.C.). “So, I think you’re going to see some major irregularities and here’s my statement: democracy depends on fair elections.”

It remains to be seen how many ballots have been rejected in Michigan and other battleground states as the Department of Justice continues to probe alleged evidence of voter fraud.