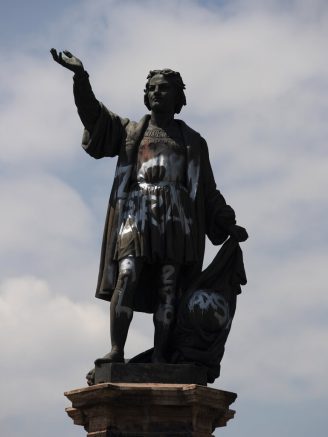 A defaced statue of Christopher Columbus stands on Mexico City’s Paseo de la Reforma, Monday, Sept. 28, 2020. Smallpox was an unknown disease in Mexico before the arrival of the Spanish conquistadores and exploded after their arrival. Smallpox and other newly introduced diseases went on to kill tens of millions of Indigenous people who had no resistance to the European illnesses in the Americas. (AP Photo/Marco Ugarte)

A statue of Christopher Columbus has been removed in Mexico City. The city’s secretary of government said in a statement over the weekend that the statue was taken down for maintenance purposes.

However, the removal sparked speculation it was taken down for political reasons. Protesters have been demanding its removal in recent weeks and the timing of the change came right before Columbus Day in the U.S.

“I don’t agree with having that kind of monuments on the streets because I think they represent oppression or some kind of repression that was present in that era,” stated local resident Viridiana Chacon. “So for me, there should be other kinds of monuments that represent other types of thinking rather than having these types of people on a monument that idolizes them.”

Another protest was scheduled for Monday with the motto being “we will tear them down.”