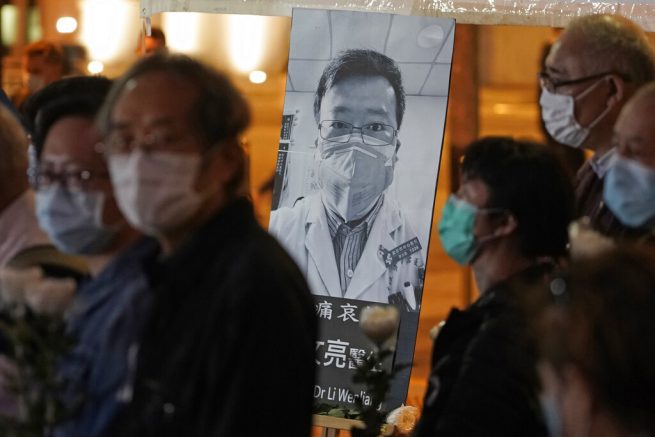 FILE – In this Feb. 7, 2020, file photo, people wearing masks attend a vigil for Chinese doctor Li Wenliang, who was reprimanded for warning about the outbreak of the new coronavirus, in Hong Kong. (AP Photo/Kin Cheung, File)

The Chinese government has issued a “solemn apology” to the family of a doctor who sounded the alarm on the coronavirus at the beginning of the year. On Friday, reports stated the government exonerated and apologized to the family of Dr. Li Wenliang, who passed away from the virus about six weeks ago.

#Wuhan police announced to revoke the reprimand order against Dr. Li Wenliang and solemnly apologize to Li's family. As an ophthalmologist in Wuhan, Li warned the public of #Coronavirus outbreak in Dec, 2019 and died of #Covid_19 infection later pic.twitter.com/jLH4Xz0ZZg

The 34-year-old had been accused of spreading rumors when he warned of the emerging virus. He was also threatened with arrest by police in Wuhan.

By the time he died, the virus had already killed hundreds.

News of his death sparked worldwide anger against the communist government and its control over information. President Trump recently rebuked the country for withholding information about the virus, which he said “could have been stopped in its tracks.”

He went on to say his travel ban on China prevented tens of thousands of new cases of coronavirus in the U.S.