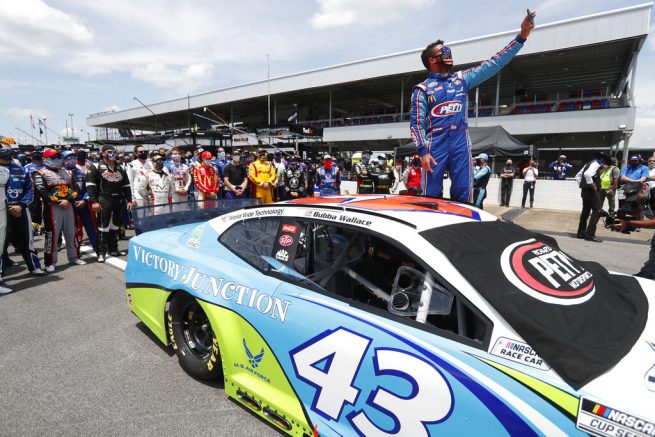 FILE – In this June 22, 2020, file photo, Bubba Wallace takes a selfie of himself and of other drivers who had pushed his car to the front in the pits at Talladega Superspeedway before the NASCAR Cup Series auto race in Talladega Ala., Monday June 22, 2020. (AP Photo/John Bazemore, File)

NASCAR driver Bubba Wallace is walking back his previous statements discrediting the investigation into an incident at Talladega Super Speedway.

During an interview Wednesday, Wallace appeared to accept the findings of the FBI and Department of Justice, which said he was not the target of a hate crime.

While he said he was “relieved” to receive the news, he added his anger was valid based on the information he had initially been told regarding the incident.

“They went through the investigation process, went through all their information, and was able to tell me and so I definitely felt relieved,” he stated. “And could tell my family that that wasn’t the case, so yeah all good, but just simply dealing with facts that were given to me.”

His comments follow an interview on Tuesday where Wallace had gone on record saying he doubted the report and dismissed statements from NASCAR and the FBI.

Integrity..something nobody will ever be able to take away from me.

God will always test us to show how strong we truly are.

Wallace has admitted he never personally saw the noose, but was told of its presence and potential significance by NASCAR president Steve Phelps.