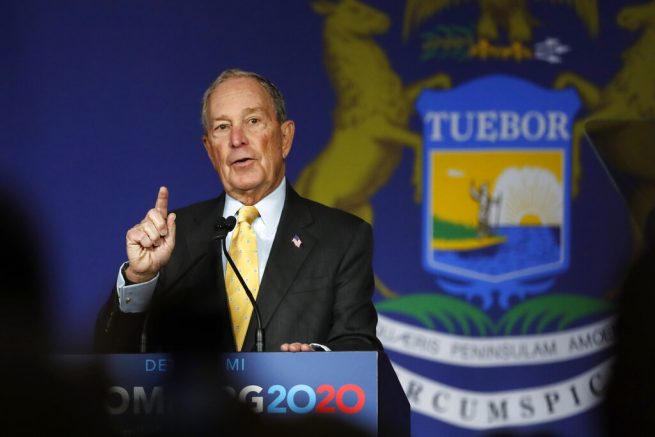 Michael Bloomberg has been rising in polls despite being excluded from Democrat debates, caucuses in Iowa and the New Hampshire Primary. His strong performance came after a series of attacks by other Democrat candidates.

The former New York City mayor responded to the latest criticism from other 2020 Democrats by pointing out that he’s the only candidate who offers an agenda strong enough to compete with President Trump’s achievements.

This came after Bernie Sanders and Elizabeth Warren took aim at Bloomberg and accused him of using his own money to finance his campaign. The far left duo also blamed Bloomberg for having too much money in the first place.

“And I guess if you’re worth $55 billion, you can get the rules changed for debate,” said Bernie. “So to answer your question, I think that that is an absolute outrage and really unfair.”

On the other hand, Bloomberg believes what’s really unfair is that he found himself in a rare situation of being excluded from Democrat debates as well as the recent caucuses in Iowa and this week’s primary in New Hampshire.

Nonetheless, the former New York mayor appears to have finally secured himself a spot at the upcoming Democrat debates in Las Vegas after a massive surge in polls. According to a recent Quinnipiac poll, Bloomberg is supported by 15 percent of likely Democrat voters. This puts him in third place as most popular, trailing Sanders and Joe Biden.

“Sanders is pretty far left and Joe is more middle of the road,” stated Bloomberg. “..my polls are going up and their polls are going down, so I don’t know why they keep that strategy, but I think each of us have to make the case to the voters.”

As a way to do just that, Bloomberg has recently ramped up advertising across the U.S. He has spent a total of $300 million on television and social media ads. The former New York City mayor is particularly targeting Texas and California, where voters will head to polls on March 3.

While acknowledging the importance of fair competition, Bloomberg said he will not embark on reciprocal attacks against his Democrat rivals. His rising chances in the Democrat race also add to the worries of Joe Biden’s campaign that struggled to maintain the trust of donors after his dismal performance in Iowa.

The deepening disarray in the Democrat field is prevalent, while voter sympathies are still uncertain.