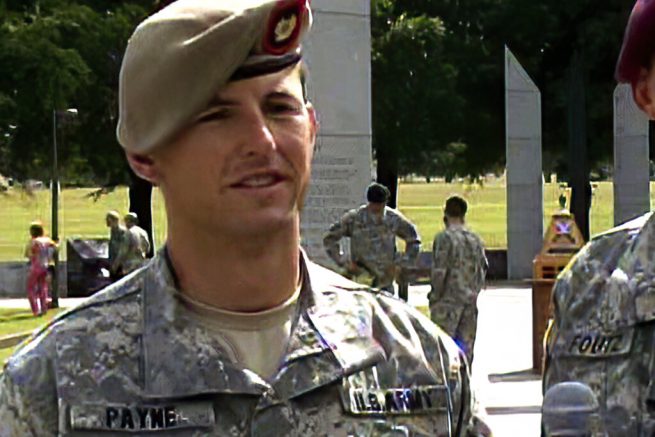 In this image from video provided by the U.S. Army, then-Sgt. 1st Class Thomas Payne is interviewed as a winner of the 2012 Best Ranger competition at Fort Benning, Ga., on April 16, 2012. (Lori Egan/U.S., Army via AP)

A South Carolina soldier is set to receive the highest military decoration for saving dozens of ISIS hostages. According to the Army, Sergeant Major Thomas “Patrick” Payne will be awarded the Medal of Honor at the White House on Friday.

Payne risked his life to rescue more than 70 Iraqi hostages from a burning building during a 2015 mission. The 36-year-old returned to the Army that same year after recovering from a grenade blast, which shattered one of his knees in 2010.

On Thursday, he shared his reaction to receiving the coveted honor.

“I was surrounded by my teammates, part of the 9/11 generation. It was a pretty special moment for us. We got a call from the President. It was a brief conversation, but he let us know he was proud of us. He informed me that I was going to be awarded the Medal of Honor.” – Sergeant Major Thomas “Patrick” Payne, U.S. Army

Payne previously tried to enlist with the Marine Corps after the 9/11 attacks when he was 17. However, his mother didn’t sign his waiver and he was not able to serve.

He’ll be recognized for his service on September 11th, marking 19 years since the attacks.