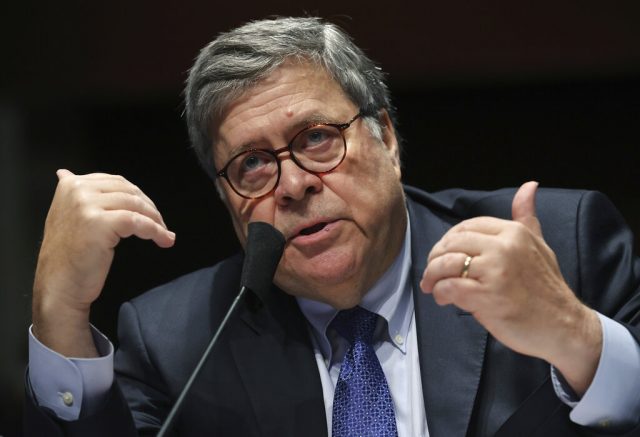 Attorney General William Barr testifies during a House Judiciary Committee hearing on the oversight of the Department of Justice on Capitol Hill, Tuesday, July 28, 2020 in Washington. (Chip Somodevilla/Pool via AP)

Attorney General William Barr said violent rioters and anarchists have hijacked legitimate protests to wreak havoc on innocent victims in the wake of George Floyd’s death. He made the statement during testimony before the House Judiciary Committee Tuesday.

Barr also called the riots in Portland an “assault on the the government of the United States.” The attorney general said members of the panel should condemn violence against federal officers and property.

AG Bill Barr: “Since when is it okay to try and burn down a federal court?" pic.twitter.com/dESoHbQKLn

“Unfortunately, some have chosen to respond to George Floyd’s death in a far less productive way by demonizing the police, promoting slogans like ‘all cops are bastard’ and making grossly irresponsible proposals to defund the police,” he stated. “The demonization of the police is not only unfair and inconsistent with principles of all people should be treated as individuals, but gravely injurious to inner city communities.”

Barr also noted that police forces today are more diverse than ever before and said instances of unarmed black men being killed by police are “quite rare.”